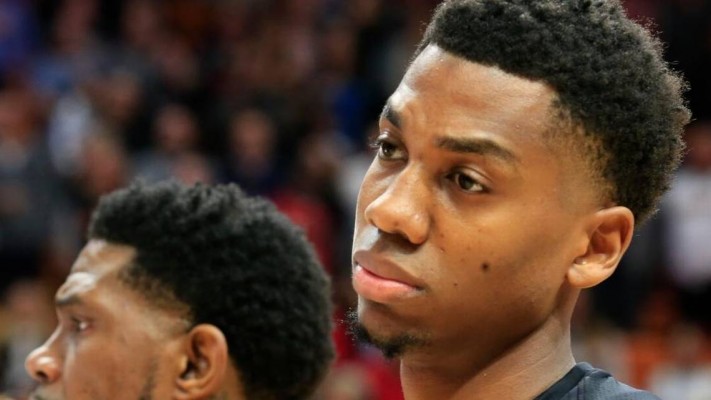 Miami Heat center Hassan Whiteside has now competed in five consecutive contests since missing nearly a month’s worth of games due to a left knee bone bruise. He hasn’t returned to quite the same duties that were previously expected of him, however. Since the talented big man’s return, the Heat have won four of five games, but Whiteside has watched many of the final minutes of those games from the Heat’s bench.

In Friday night’s win over the New York Knicks, Whiteside sat out the final nine minutes and 45 seconds of the fourth quarter, and the entirety of the subsequent overtime period. Instead of playing his highest-paid player, Heat head coach Erik Spoelstra elected to go with a smaller frontcourt comprised of Kelly Olynyk and James Johnson. It was the second time in as many games that Whiteside had watched on from the sidelines as the game was decided. He had spent the final six minutes of the win over the Detroit Pistons on the bench as well.

Spoelstra seemed to predict Whiteside’s role in Friday’s victory when he spoke about what he liked so much about having both Johnson and Olynyk on the court.

“We become a much more, significantly more versatile team with James Johnson on the court,” Spoelstra answered when asked before Friday’s win what he likes about pairing Olynyk and Johnson together so much. “We already have versatility throughout our roster, but that takes us to a totally different level. And then when you have two guys at the same time, two bigs that can handle, can shoot, make plays off the dribble, play in the post, there’s not anywhere on the court where you can’t be effective. That [pairing] just presents some challenges.”

Whiteside has shown growth, however, in his ability to accept a reduced role in the closing minutes of recent games because he knows it is benefiting his team.

It may take some time for the 7-footer to return to pre-injury form, but he is already having a large impact in games despite his lack of action in the closing minutes. Since his return, Whiteside has averaged 11 points and eight rebounds per game. Still, he’s played only 11 of a possible 65 minutes total in the fourth quarter or overtime during those five games. That hasn’t gotten in the way of his drive, however, as he continues to try and grow into the star the Heat hope he can become.

“I work on my game every day,” Whiteside said. “So everything you see me do on the court, I do it all the time. I’m working on my game. I can’t control my minutes. But I’m just going to come in and keep getting better. Whenever I’m out there, I produce.”

The Heat are clicking in a way that fans have not enjoyed for quite some time. While there are, of course, ways to improve, they are gaining confidence and momentum as the 2017-18 NBA season nears its halfway point. If everyone on the roster follows Whiteside’s lead, and looks to make the most positive impact possible when given the opportunity, the success Miami is enjoying now should only continue.
[xyz-ihs snippet=”Responsive-ImagenText”]