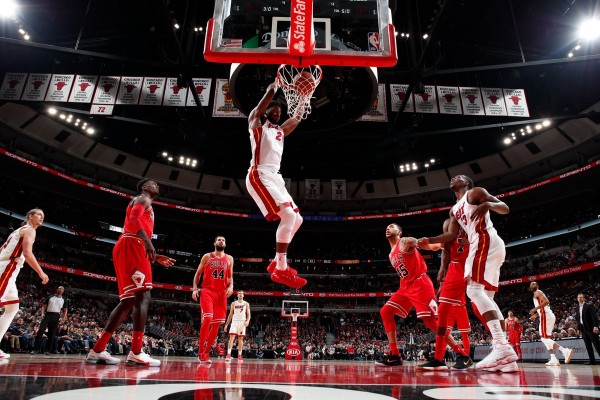 (Chicago, IL) — After enjoying a season-high seven-game winning streak, the Miami Heat looked to get a five-game road trip off to a good start when they traveled to Chicago on Monday to take on the Bulls. While the Heat made it interesting in the last few minutes of the game, the Bulls controlled the vast majority of the contest and handed the Heat their first loss of 2018, 119-111.

“It goes however it goes. We didn’t get the job done. That’s the bottom line,” Heat head coach Erik Spoelstra said after the defeat. “It looked like we were getting it back, we got it to six, and then they made bigger plays down the stretch. We really thought we had the momentum, we thought we had shifted it when we got to six. You have to credit them.”

Miami had been down by double-digits for much of the second half of Monday’s contest and with just over seven minutes left in the game it was down 15 points, 98-83. During its seven-game winning streak, Miami had proven to be one of the most clutch teams in the NBA, and it attempted to make good on that reputation in the game’s final stretch.

Led by Goran Dragic, who finished the game with 22 points, nine assists, and five rebounds, and Kelly Olynyk, who added 21 points and eight assists off the bench, the Heat went on a 14-5 run to cut their deficit to just six points with 4:18 left in the game.

The Bulls answered quickly on the other end, but when James Johnson hit a huge three-point shot to bring the score to 105-100 with 3:39 left in the game, it looked like the Heat had a chance to steal the improbable victory.

Chicago was determined to hold onto their shrinking lead, however, and Justin Holiday pushed the Chicago lead to back to seven after converting on a long jumper. Dragic brought the Miami deficit back down to five after an impressive drive and layup, but when Bulls rookie Lauri Markkanen nailed a long three-point shot with just over one minute left in the game, it seemed clear that the Bulls were going to get out of the game with the win.

“We weren’t communicating very well, and we were not giving them enough static on the three-point line,” he said following the game. “We weren’t taking care of the ball very well at end of the first half so that led to a couple of them getting momentum plays.”

The game was not the only loss for the Heat on Monday. Midway through the third period, Tyler Johnson tangled his legs up with Bulls big man Robin Lopez and collapsed to the court in pain. It was a scary scene as team doctors inspected the shooting guard’s lower left leg, seeming to pay close attention to his knee. He was later carted off the court and seemed to be in a great deal of pain.

It was later reported that Tyler Johnson had suffered a sprained left ankle and that the X-rays had come back negative. There is no telling how long it will take for the streaky scorer to return, but considering the initial fear of a serious knee injury, a sprained ankle is welcome news.

“The first part of the news is he’s relieved. We were all thinking the worst, but we’ll see if we can get an MRI tomorrow,” Spoelstra said of his guard’s injury. “Right now he just has it wrapped in tape so that’s a good sign as well, but we’ll know more tomorrow.”

After their incredibly convincing win over the Milwaukee Bucks just one day before, the Heat appeared to lack much of what had helped them reach their seven-game winning streak on Monday. Offensively, the Heat seemed out of synch for much of the second half. Defensively, they let up the most points in a game since their 123-95 loss to the Golden State Warriors back in early December.

Miami will look to reclaim their winning ways on Wednesday night when they travel to Milwaukee to face off against the Bucks for the second time in four days.
[xyz-ihs snippet=”HN-300×250-TextnImage”]