Hassan Whiteside ‘Frustrated’ by Lack of Minutes Since Return From Injury 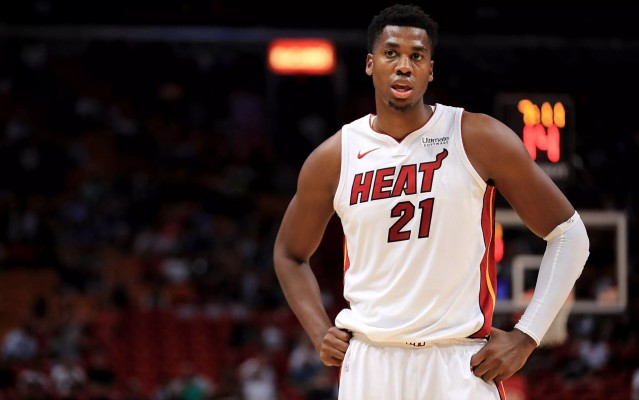 The return of Miami Heat center Hassan Whiteside to the team’s lineup on Nov. 1 was a welcome sight for teammates, coaches, and fans. The center had missed the previous five games because of a bone bruise on his left knee, but returned just as the team was making its first Western road trip.

Despite that long-awaited return, Whiteside has expressed some frustration in the way he’s being used since getting back on the court. Whiteside’s comments came in the wake of the team’s tough road loss to the Denver Nuggets on Friday night.

“Man, I don’t know, it’s frustrating,” Whiteside said. “It happens every game — first quarter we get a big lead, coach takes out the starters, they tie it up and then we’re back and forth.”

In that tight affair, the Heat took an early nine-point first-quarter lead, then fell behind by that amount in the fourth quarter. While they battled back to briefly take the lead, they ultimately ended up on the short end of a 95-94 heartbreaker.

Whiteside played just under 24 minutes in the defeat, scoring 13 points and picking up three second-half rebounds. He also added a pair of blocked shots.

“I don’t know, man,” Whiteside said. “I think I’m on a minutes restriction or something. I don’t really know what’s going on right now.”

The specter of last season’s injury-plagued first half is presumably the key reason why Spoelstra is looking at getting Whiteside reacclimated slowly to avoid a recurrence of the issue, which could conceivably keep him out of the lineup for a much longer period.

The Heat will play back-to-back contests in California over the next 48 hours, beginning with a Sunday afternoon clash against the Los Angeles Clippers. That’s followed by a Monday night matchup against the defending NBA champion Golden State Warriors.
[xyz-ihs snippet=”HN-300×250-TextnImage”]