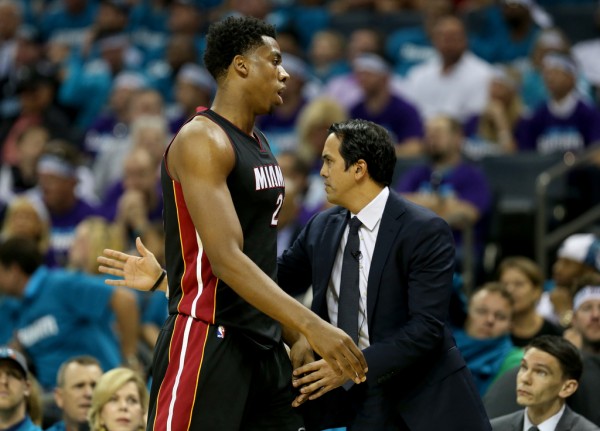 What at first seemed like a minor injury has turned into a major problem for Hassan Whiteside and the Miami Heat. The talented big man was initially expected to be out for a week or two when he suffered a bone bruise on his left knee back in late November. However, he has now sat out for nearly a month, and there is still no timetable for his return.

There has been very little information regarding his recovery as of late. Heat head coach Erik Spoelstra did update reporters before Wednesday’s matchup against the Boston Celtics, however, and said that Whiteside’s status is improving.

“He’s making progress,” Spoelstra said of Whiteside. “He’s doing a lot of conditioning. He’s doing a little bit more court work. I see that all as a great sign. And he’s feeling less pain and discomfort each day.”

The Heat have gone 6-5 in Whiteside’s absence. While players like Kelly Olynyk and rookie Bam Adebayo have helped shoulder the center’s load, it is hard to replace the 14.9 points and 12.7 rebounds per game he has averaged so far this season. Still, Adebayo has certainly proven himself in the last few weeks and will likely play a larger factor in Miami’s rotation even when Whiteside returns.

“Whatever happens, happens,” Adebayo said when asked if he believes he’s proven he belongs in the Heat’s rotation when Whiteside is healthy. “I can’t dictate that. I’m going to leave that up to coach. Whatever his move is, that’s what I got to go with.”

The University of Kentucky product has averaged 7.1 points and 5.1 rebounds in the 11 games that Whiteside has missed. While the numbers don’t jump off the page, he is growing noticeably more comfortable in his role with each passing game.

“It’s slowing down for me,” Adebayo said. “I’m starting to calm down. There’s no anxiety for me anymore. So just being out there with my teammates, communicating, and after that I get lost in the game.”

Despite the multitude of injuries the Heat have dealt with so far this season, they currently hold a 16-15 record and are just one game back of first place in the Southeast Division. If Whiteside and Miami’s other injured players are able to return soon, this team could become a true danger for the rest of the NBA.
[xyz-ihs snippet=”HN-300×250-TextnImage”]