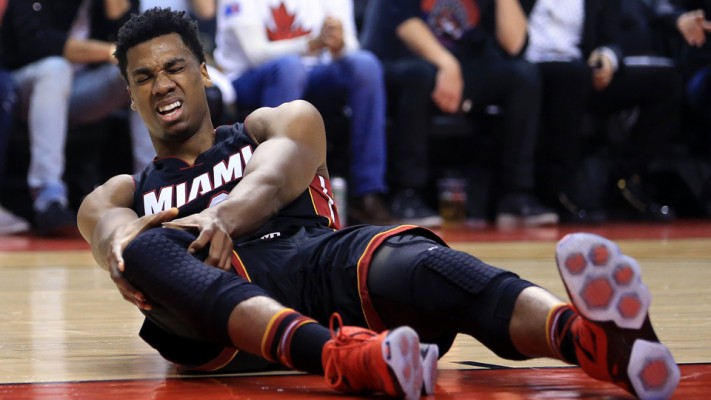 News that Miami Heat star center Hassan Whiteside would miss Wednesday night’s game against the New York Knicks was concerning, but it didn’t seem like a cause for panic. That all changed on Wednesday afternoon, however, when it was reported that the pain in Whiteside’s knee has worsened and that his absence from the court could continue.

Whiteside spoke to reporters from Madison Square Garden on Wednesday to discuss the news of his lingering knee injury.

Whiteside had not missed a game since Oct. 30, but according to the talented big man, the knee pain has never really gone away.

Though he has averaged an impressive double-double with 14.9 points and 12.7 rebounds per game this season, the talented big man said that the pain in his knee has impacted all phases of his game:

“Everything, man, everything,” he said.

The shot-blocker did not say, however, whether or not his continued play has made the injury worse. Earlier in the season, Whiteside made news when he expressed frustration with his reduced minutes after he had returned from the initial injury.

Head coach Erik Spoelstra also weighed in on the news.

“It’s the same thing he’s been dealing with the last three weeks,” Spoelstra said. “Since he’s been back the days in between have been recovery days.”

Spoelstra added that because of the pain, Whiteside was never likely to play in the second game of the Heat’s back-to-back.

“So the back-to-back anticipated he probably wouldn’t play today,” the head coach said. “We’ll get back to Miami and reevaluate him [Thursday]. Jay will look at him and might have doc will look at him. We don’t think necessarily right now he’ll have an MRI. He’s already gotten one of those.

“This is part of the process. We anticipated this. It hasn’t gotten any worse, necessarily, just the schedule hasn’t let up and he really hasn’t been able to do two days of work in a row for a while.”

The head coach did say, however, that even if the Heat had had a break between games, it’s doubtful that Whiteside would have suited up.

“He’s pretty sore,” he said. “This road trip, I don’t know if he would have played [Thursday].”

The Heat have played some of their best team basketball when they have been able to rely on Whiteside to dominate near the basket on both sides of the court. It will be fascinating to see how the team deals with this setback as Whiteside works to come back healthy and pain-free.
[xyz-ihs snippet=”HN-300×250-TextnImage”]