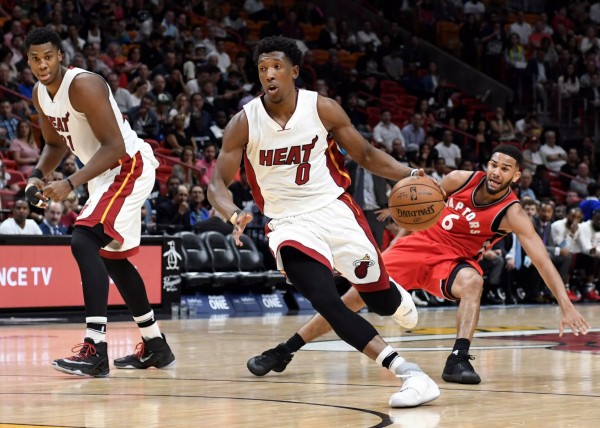 Miami Heat combo guard Josh Richardson is enjoying a lot of success in the young 2017-18 season. Through three games, the former second-round draft pick is averaging 14.3 points, 4.7 rebounds, 2.7 assists, and a whopping 1.3 blocks per game.

His performance is not only drawing attention, but comparisons to former Heat greats as well. Head coach Erik Spoelstra compared Richardson to Dwyane Wade following Monday’s win over the Atlanta Hawks. While Spoelstra did not mention Wade by name, the message was loud and clear.

“What didn’t J-Rich do tonight,” Spoelstra said. “He was great defensively. Those are the type of plays at the rim we had a former two-guard here make, those kind of blocks. There’s just not many twos in the league that can make those kind of plays and then guard one through four. But stretch the floor for us, space the floor for us and then when needed in the fourth quarter he was very aggressive, being able to attack when their defense stepped up.”

Teammate Wayne Ellington was also impressed, saying Richardson’s game and role as a leader is evolving.

“J-Rich gets it done on the offensive end and especially on the defensive end,” Ellington said. “He shoots for us. He’s a leader out there on the floor. His game is evolving. He’s getting better every day. He’s becoming the type of player that he’s capable of being. When coach [compares him to Wade], I understand why he’s saying that. To see his progress from last year to this year and see how he’s maturing, I feel like the sky is the limit for that guy.”

“Josh has got more,” Dragic said. “His rookie year, his main thing was to play defense and when he was open to shoot the ball. Now, of course, he has a bigger role on this team. He gets the ball in the fourth quarter. He needs to create. All these things. It’s not like he didn’t have them before, but now we’re seeing it. We need him to be like that. And he’s growing. He’s feeling more comfortable in that role and you can see he’s emerged.”

For Richardson, his health has been one of the biggest reasons for his improving game.

“It feels awesome,” Richardson said of playing healthy. “That’s why I want to [dunk] so much now. I’ve been going so long not knowing if my leg is going to give out when I jump or if it’s going to hurt. Now I feel bouncy every time down the court. It’s awesome, so yeah I want to take advantage of that.”

That added confidence led to one of Richardson’s best career games on Monday, with 21 points, four rebounds, two assists, three 3-pointers, two steals and two blocks. If these kinds of performances continue, the comparisons surely will as well.

The Heat fell short of signing a marquee free agent this past offseason. They did, however, sign Richardson to a four-year, $42 million extension this past September. By the way his teammates and head coach rave about him, it seems Richardson could become the Heat’s marquee player after all.
[xyz-ihs snippet=”Responsive-ImagenText”]