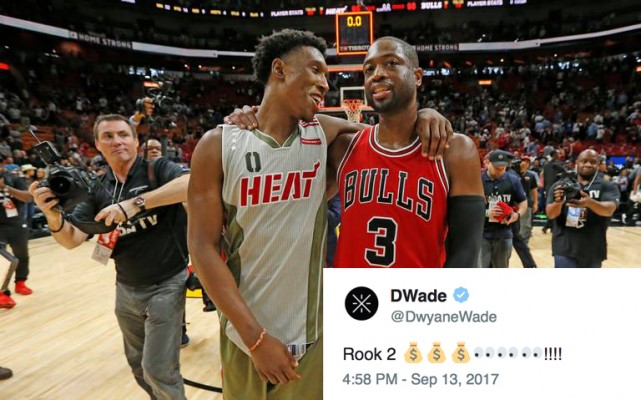 On Wednesday, news broke that the Miami Heat and shooting guard Josh Richardson had agreed to a four-year, $42 million extension. Just as the ink was drying on Richardson’s first contract since his rookie deal, former teammate and Heat legend Dwyane Wade took to social media to celebrate the news.

As Wade is known to do, he showed support for a fellow player with a brief message on Twitter.

Richardson quickly tweeted back, letting Wade know that the love is mutual.

Richardson was a second-round pick by the Heat in 2015. While he missed time due to injury last season and has averaged only 8.4 points, 2.6 rebounds and 2.0 assists in his two-year career, it seems the Heat see Richardson as the shooting guard of the future. Who better to congratulate him on the new contract than the Heat’s best all-time shooting guard in Wade.
[xyz-ihs snippet=”Responsive-ImagenText”]