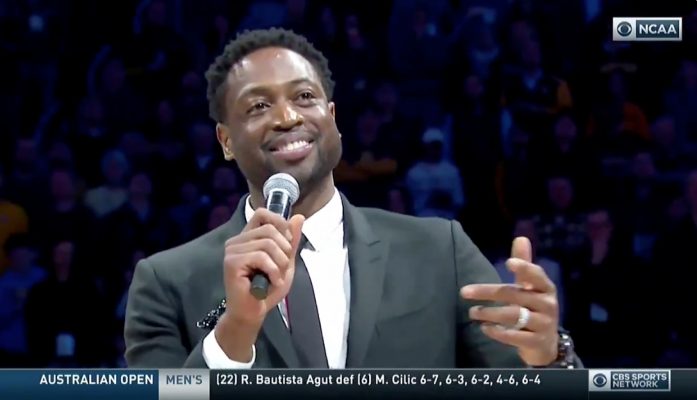 Dwyane Wade has been celebrated throughout the NBA this season, and on Sunday afternoon that celebration expanded to the world of college basketball when Wade’s jersey was retired by his alma mater, Marquette University.

“I carry that Marquette badge with me proudly everywhere I go.” – @DwyaneWade

Golden Eagles and @MiamiHEAT star, Wade looks back on his time in Milwaukee as he sees his No. 3 jersey lifted into the rafters. #onelastdance pic.twitter.com/RRlq0iYwmI

“Along the journey, I’d like to thank you guys for your support, for pushing us, for giving us this energy, giving us this love that we all needed,” Wade began. “It was so needed in my life at that time. As I said when I came on this campus, thank Marquette University for taking a chance on a young kid from the inner city of Chicago, giving me an opportunity to come to this prestigious university, taking me in, showing me love. I will never forget it. I carry that Marquette badge with me proudly everywhere I go.”

Not only did Wade get his jersey retired, he also got to watch an epic tribute video dedicated to his time at Marquette.

From Marquette University, No. 3, @DwyaneWade… pic.twitter.com/IG74CAbxj3

It’s pretty special to see Wade return to the place where it all began for him, and it is clear that as important as the Miami Heat are to his basketball life, so too is Marquette.

Now that Wade’s college jersey is officially retired, the only No. 3 jersey left to retire is his NBA one. With his career coming to an end at the end of this season, it likely won’t be too long until he watches his Heat jersey hung in the rafters as well.
[xyz-ihs snippet=”HN-300×250-TextnImage”]