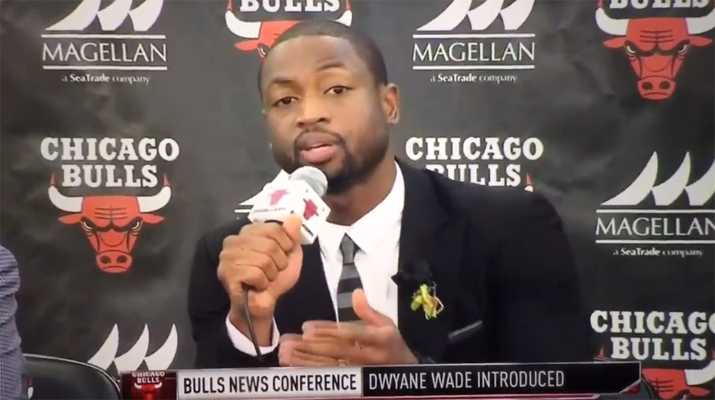 Wade was asked about his new team and also about how he left his relationship with the Miami Heat organization. He revealed details on what went wrong in negotiations with the Heat’s front office.

Pat Riley said a couple weeks ago that he had wished he had been more involved in keeping Wade in South Beach. Apparently the report about Riley not calling Wade throughout free agency was true.

Wade on Riley: "He didn't call or email or text or nothing like that to try to sway me or try to get me back."

Wade's full explanation as to why he left Miami and why he never spoke to Mickey Arison during process: pic.twitter.com/ib6qKb0nmN

However, Wade maintained that he made the ultimate decision to leave, even though there was an offer from the Heat. He also cleared up any notion that he left Miami because of the money.

“This was not a money deal. If this was a money deal I wouldn’t be sitting here. I would have taken the most money. At the end of the day, this is a place I wanted to be,” said Wade.

In regards to any personal rift with Riley, Wade was adamant that he had the utmost respect for the Heat president.

“I have no rift with Pat Riley. It’s funny the reports come out about a lot of different things. I’ve never seen nobody around me and Pat when me and him was talking. I didn’t see no one CC’d on the emails that we talk about. I have nothing but respect for what he’s done in this game. I have so much to learn. So I have no rift in that,” added Wade.

He noted that the direction that the Heat were moving in was the not the same as his vision.

“This year, the direction and the focus for that organization in Miami — which I have nothing but love and respect for — was a little different than it has been in years past,” Wade explained.

This was surprising because it seemed that throughout the 13 years Wade had spent in Miami, the Heat and Wade had always been on the same page. This may signify that the Heat committed to a rebuilding phase for the team — which Wade probably did not want to be a part of at the age of 34.

Wade was candid about how surprised even he was that he ended up in Chicago. He talked about how it was not the easiest decision for his wife, actress Gabrielle Union, and his kids to come to terms with.

“You come accustomed to seeing people in certain arenas. No one expected this to happen. No one,” said Wade.

Even though the initial shock has worn off for most Heat fans, there will be a lot of mixed emotions when Wade is introduced in American Airlines Arena for the first time wearing a Bulls jersey.
[xyz-ihs snippet=”Responsive-ImagenText”]