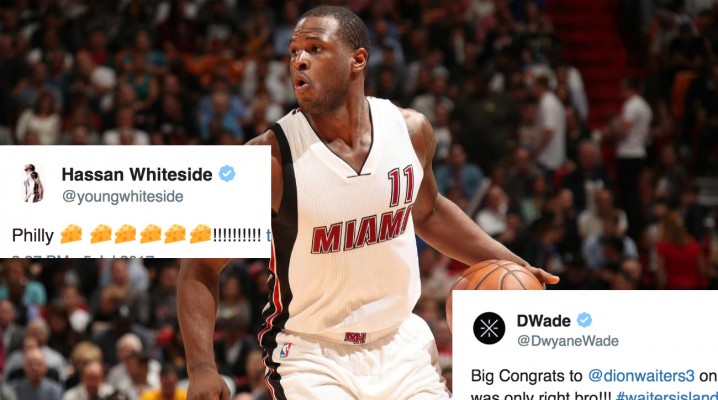 Hassan Whiteside is excited to have his starting backcourt returning next season after free agent Dion Waiters agreed to re-sign with the Miami Heat on Wednesday.

The star center tweeted out this emoji-filled congratulations soon after the news broke:

Even the best shooting guard in Heat history congratulated Waiters on his new deal:

Waiters turned down a player option worth a little more than $3.2 million to test free agency after he averaged 15.8 points per game, the second-best mark of his career, in his first season with the Heat. Miami rewarded his performance with a considerable four-year, $52 million deal that will ensure “Philly Cheese” will stay in South Beach for the foreseeable future.

The 25-year-old spoke late in the season about his wish to return to Miami, a move that clearly delighted his teammates.

“I am enjoying this thing,” Waiters said. “Whatever it takes [this summer], I just want to be here. What we’re building here, we have a chance to do something special. I want to get it done as quick as possible. Let’s keep this thing rolling by any means. I don’t want to go into free agency with a couple days and make a decision. I don’t want that. I know where I want to be. Let’s just get it done. My mom loves it here. Would be mad at me [if I left]. My son loves it. My family loves it.”

Waiters was limited to 46 games last year because of injury but had a profound impact during the team’s late-season resurgence. He retweeted this message from journalist Fred Katz acknowledging his hard-earned reward for taking a cheap one-year deal last season:

Waiters took a risk, signed a 1+1 last summer for $2.9M and ended up with his big payday. Happy for him. Was always a joy to cover. https://t.co/oDJnghnqVu