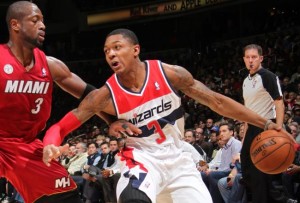 Getty Images, "The Wizards would seem as good a team to get well against as anyone, as the struggling Los Angeles Lakers can attest to after snapping their four-game losing skid with a 102-96 victory in Washington on Friday night."

The Miami Heat will get a chance to get a very small bit of redemption Saturday night when they welcome the worst team in the NBA to American Airlines Arena, as the Washington Wizards look to make it two wins in a row over the defending NBA champions.

Washington (3-17) pulled off an improbable 105-101 victory over Miami (14-6) on December 4 in D.C., getting a remarkable 64 bench points to overcome the 70-point effort of the Heat’s big three of LeBron James, Dwyane Wade, and Chris Bosh.

It was the high point of an otherwise miserable season for the Wizards this year, and perhaps the most embarrassing moment of the year for the Heat.

Miami followed that performance up with home wins over New Orleans and Atlanta before falling to the Golden State Warriors 97-95 on Wednesday night.

That loss dropped the Heat back into a first-place tie with the Hawks atop the Southeast Division standings and two games back of the New York Knicks in the Eastern Conference.

Given that the Heat have played eight of their last nine games at home, a 3-3 stretch to start the month of December probably isn’t what Miami had in mind, and Heat coach Erik Spoelstra expressed disappointment after Wednesday’s loss that the team hadn’t taken better advantage of its recent stretch of home games.

But James said after the loss that there’s no reason for the team to panic about losses this season in the year.

“You learn from mistakes and move on. This is a long season and we’re not in a bad place right now,” he said. “We’re not mad about the situation. We’re good.”

The Miami defense has certainly improved since giving up 105 to the Wizards and then 112 to a Carmelo Anthony-less Knicks team, holding the last three opponents under 100 points.

Yet the Heat still ranked just 22nd in the NBA in defensive efficiency, allowing opponents to score 107.59 points per 100 possessions.

Miami is the only one of the bottom 10 teams in the league in defense that has a winning record.

A major defensive breakdown on the last possession Wednesday night cost the Heat at least a chance for overtime, as Shane Battier lost Warriors rookie Draymond Green under the basket with no one there to help as Green laid the ball in for the game-winning bucket.

The defense seems to be improving after a disastrous start, but as that play clearly indicated, it’s still a work in progress for the champions.

“Everybody in this room is a professional,” Bosh said after the game. “We’re going to do what we need to do to get better.”

The Wizards would seem as good a team to get well against as anyone, as the struggling Los Angeles Lakers can attest to after snapping their four-game losing skid with a 102-96 victory in Washington on Friday night.

Washington is the worst offensive team in the league this season, scoring just 97.53 points per 100 possessions.

The win over the Heat was the only time in the past nine games that the Wizards have topped the 100-point mark.

They’ve only won once since upsetting Miami, losing to Atlanta, Golden State, Houston, and the Lakers.

All of the losses were by single digits, thanks largely to the team’s surprisingly respectable defense, and of those four teams, only the Lakers have a losing record, so the Wizards are at least giving themselves a chance to be in games late.

With the way the Heat have continued to play to the level of their competition this season, that could mean another competitive game in the fourth quarter Saturday.

* The Heat will have a moment of silence before Saturday’s game to honor the memory of the 26 people, including 20 children, who were killed in the school shooting in Newtown, Conn. Friday.