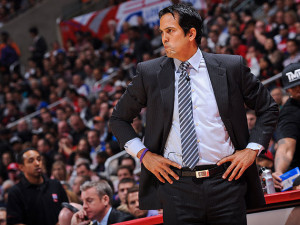 Getty Images, "Two of the premier teams in the NBA will clash Thursday night on South Beach when the Miami Heat welcome in the San Antonio Spurs in a game that could serve as an NBA Finals preview."

The Heat (10-3) have won four straight after notching wins over the Denver Nuggets, Phoenix Suns, Milwaukee Bucks, and Cleveland Cavaliers, but they’ll take a step up in class against a Spurs (13-3) team that has won five straight and again appears to be among the elite Western Conference clubs.

All of the Spurs’ five straight wins have come on the road, starting with a 112-100 win in Boston over the Celtics on Nov. 21, and ending with a 110-89 triumph over the Orlando Magic on Wednesday.

Though much of the preseason chatter about the West featured talk about the new-look Los Angeles Lakers and the defending conference champs Oklahoma City Thunder, the Spurs quietly sit above both in the standings, which Heat guard Dwyane Wade said shouldn’t be a shock to anyone.

“It’s no surprise.  Year in and year out, the Spurs come into the season and they’re not going to be one of the talked about teams in the NBA and they’ll end up having the best record,” he said. “It should be no surprise when that happens.  We’ve come to expect it.”

San Antonio as one of the league’s top teams is easy to predict, but it’s the resurgence of Tim Duncan that has caught many off guard thus far.

All of those numbers either match or surpass those of the past three seasons for the 13-time NBA All-Star.

Duncan’s 27.3 Player Efficiency Rating ranks him third in the league behind the consensus top two players in basketball LeBron James and Kevin Durant.

James said nothing that the Spurs legend does takes him by surprise at this point.

“He’s a Hall of Famer for a reason, one of the greatest to play this game,” he said.  “He prepares himself physically and mentally every season.  He’s in shape, and he has great comfort with his guys and his system.  He’s a true professional.”

While Duncan’s high level of production recalls some of the old Spurs teams built around Duncan’s dominance and a defense-first mentality, the Spurs in recent years have become much more fast-paced and dynamic offensively, and that has held true this year as well.

San Antonio is fifth in the league in offensive efficiency, averaging over 109 points per 100 possessions after leading the NBA in offense a year ago.

“They’re so unselfish and they do a great job of moving the ball, and they know what their strengths are,” Miami coach Erik Spoelstra said of the Spurs.  “They play fast, they spread the floor and move you around, and they do it with a pace and a spacing that’s similar to what we do.”

Meanwhile, the Spurs defense has had somewhat of a renaissance so far, jumping from 10th in defensive efficiency last season up to third this year.

San Antonio is one of only two teams in the NBA – the Memphis Grizzlies being the other – to rank in the top five in the NBA in both offense and defense.

That adds up to a major challenge for the defending champions, but it’s the kind that Heat center Chris Bosh said the team always gets geared up for.

“When you go against the juggernauts of the league, it’s always a good time to measure yourself and see where you are,” he said.  “Any time you play a good team, they challenge you to stay disciplined.  It’s a challenge to stay mentally focused and sharp no matter what happens.”

Miami will likely be down a man with starting forward Shane Battier listed as doubtful to play with a sprained MCL.

Spoelstra said Tuesday that he hadn’t made any decision about who would start in Battier’s place, and that he was still in the process of hashing out the rotation in his absence.

Wade said it will be odd to take the court without Battier after the veteran forward has missed just one game since being signed last summer.

“We have the personnel that we can slide other guys in to fill that position. We’ll miss him, but we have other guys who can step up.”