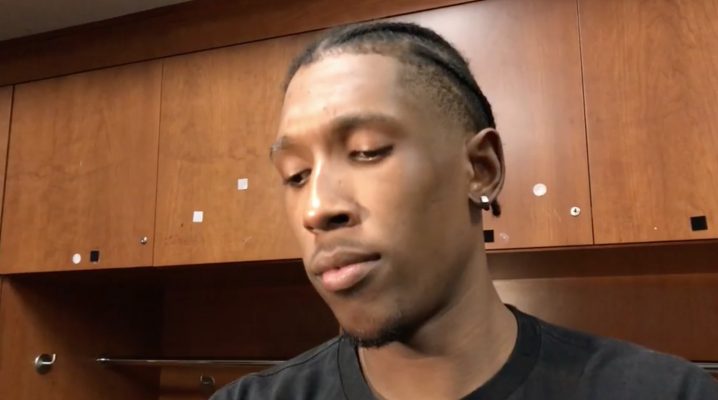 In the final opportunity for the Miami Heat to complete a comeback and get a win in their 2018-19 season opener on Wednesday night, Josh Richardson dribbled out of bounds and ended the game in anticlimactic fashion.

The costly error on one of the game’s most important possessions cast a shadow over what was otherwise an impressive performance by the small forward. Following the game, Richardson explained what went wrong.

“I came off the screen, they switched it, good switch,” Richardson said after the game. “It was a good pass. I kind of bobbled it at first, and then I thought I had a little bit more space on the baseline and I was gonna attack. Probably spin back and make something happen from there, but yeah I ran out of real estate.”

Richardson then commented on the new role he has on the team as a player who will be expected to take those last-second shots:

“It’s a role that I’ve asked for, that I’ve been wanting, and it comes with the good and the bad, so it’s a learning experience.”

Before the final play, Richardson had put on quite a show in the game. He finished the night with 21 points, five rebounds, and three assists in 38 minutes of play. If Richardson can build upon that kind of performance, there is no doubt that he will get another opportunity to make up for his missed potential game-winner tonight.

With the loss, the Heat open up the 2018-19 season with a 0-1 record, but they won’t have to wait long to get back to even. They’ll face off against the Washington Wizards on Thursday night.