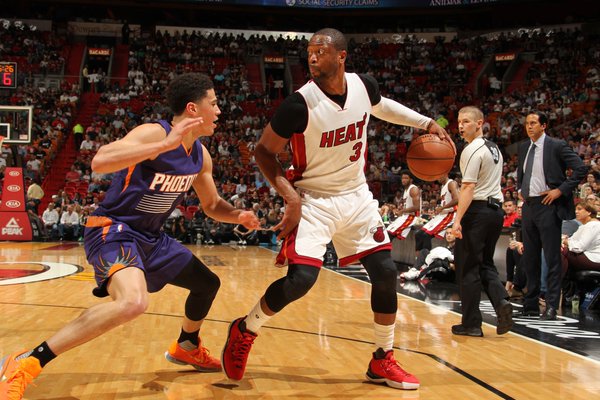 All-Star shooting guard Dwyane Wade, who came into the contest averaging a whopping 25.4 points per game in 18 career contests against the Suns, finished with a team-high 27 points and seven assists.

“What I liked most about tonight is we came out early to take care of business,” said Wade. “That’s the NBA. Teams are going to make runs.”

Despite the fact he played under the weather and with a headache, Wade stepped up to contribute a great effort for the Miami crowd.

“You don’t feel great but you try to go out there and give your team what you can,” Wade said.

Four players on the current Heat roster used to play for the Suns, including starting point guard Goran Dragic, who racked up 25 points, seven boards and four assists against his former team.

After the game, Dragic was quick to comment on the tweet he made recently about his tenure here in Miami with the Heat.

I love this team !!! @MiamiHEAT https://t.co/YEaUGocUpD

“It’s not only the last few games, it’s from day one of training camp until now,” said Dragic. “We know this season there will be ups and downs, and I struggled in the beginning of the season, but my teammates were there for me. It’s always nice to have team around you and to help you, and so I think that’s the beauty of this team sport. We are trying to help our teammates and we are like family. Only like that we can prove ourselves as a team.”

The Heat, who led by as many as 21 points in the game, never trailed the Suns once the entire night on Thursday.

Small forward Luol Deng scored 12 points to go along with four rebounds and four assists for Miami, while center Hassan Whiteside came off the bench for nine points, 11 rebounds and yet another five blocked shots in only 23 minutes of playing time.

The explosive 19-year-old rookie guard Devin Booker, drafted 15th overall in the 2015 NBA Draft out of the University of Kentucky, desperately tried to keep the Suns in the game to no avail.

Although 19 of his 34 points total points (11-of-22 from the field, four assists and three rebounds) came in the fourth quarter, Booker couldn’t get his team close enough in the second half.

After the up-and-coming Suns star was praised by Wade during and after the game, Booker didn’t hesitate to show his respect as well.

“Dwyane’s a living legend, everyone knows that,” said Booker. “Especially when he’s here in Wade County.”

For the Suns, center Alex Len had 12 points and 13 rebounds, while forward Mirza Teletovic scored 11 points on the road.

For a frustrated Suns team that has lost 30 of its last 33 contests, guard Archie Goodwin and forward P.J. Tucker had 10 points apiece for their squad in a losing effort.

Up next, the Heat will be right back at it Friday night when they take on the lowly Philadelphia 76ers (8-53) at Wells Fargo Center. The contest, which is scheduled to tip off shortly after 7:00 pm ET, will be broadcast live locally on Fox Sports Sun.
[xyz-ihs snippet=”Responsive-Ad”]