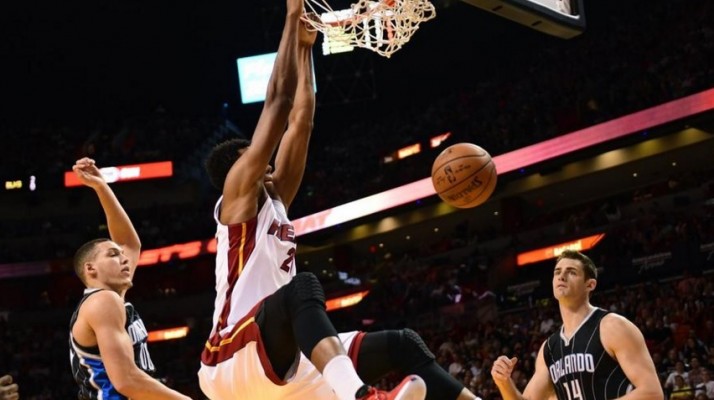 (Miami, FL) – Breaking open what had been a tight game by scoring 12 unanswered points in the final four minutes of the third quarter, the Miami Heat got back on winning track with a 108-97 victory over the Orlando Magic on Friday night at American Airlines Arena.

The key factor throughout that third period was defense on the part of the Heat. They held the Magic to just 12 points and allowed them to connect on just 21 percent of their field-goal attempts. In contrast, the Heat scored 31 and hit 60 percent of their field-goal attempts. For the entire second half, Miami was able to hold their opponents to just 40 points, with seven of those points coming in the final two minutes after the game had been decided.

The Heat had taken the lead for good on an Amar’e Stoudemire tip-in with 8:16 left in the third period to make it 64-62. Four minutes later, an Orlando basket made it 73-69, but after a three-pointer from Josh Richardson at the 3:49 mark, Miami ran off nine more points to take an 85-69 lead into the final quarter.

From that point, they continued to increase the margin, leading by as many as 18 to improve their record to 42-30 on the year. The Magic drop to 29-43 on the season.

After the game, Heat head coach Erik Spoelstra spoke about how the team needed to simply concern themselves with winning games and not on their potential playoff spot:

“We don’t put up the standings and say we need to get here and look at this team and what they did,” Spolestra said after the game. “We have to focus on what we’re doing. I know that probably everybody is saying that. But you can’t expect anyone to help you. You need to take matters into your own hands.”

Hassan Whiteside picked up another double-double, leading all scorers with 26 points and reining in 12 rebounds, while also swatting away five shots. He was one of six Heat players who ended the night in double figures. Goran Dragic tallied 22 and dished out eight assists, while Richardson ended the night with 14 points, which included a trio of three-pointers.

Whiteside offered some insight after the game about his night:

The remaining three double-digit scorers included Stoudemire with 13 points and five rebounds, Luol Deng with 10 points and 13 rebounds and Dwyane Wade with 11 points and four assists. Deng was back in the starting lineup after missing Wednesday night’s contest in San Antonio.

The tightly contested first half saw eight ties and seven lead changes, with no team having larger than a five-point lead. Miami held a 52-48 advantage with three minutes left before intermission, but the Magic closed on a 9-2 run to hold a 57-54 halftime lead. The lone Heat points came on a pair of Wade free throws with 9.6 seconds remaining.

Whiteside spoke about how his play is vindicating his belief in his ability:

“I just think about all the days that I sat out and everybody said I couldn’t do this, I can’t play here,” Whiteside commented. “I’m going to go out there and give 100 percent. Every day is a day to remember me.”

The Heat stay at home for their next matchup, a Monday night clash against the Brooklyn Nets, which will tip off just after 7:30 p.m. ET. Miami will be seeking to garner a season split, with their only previous meeting at American Airlines Arena on December 28, when the Nets came away with a 111-105 victory.[xyz-ihs snippet=”Responsive-Ad”]