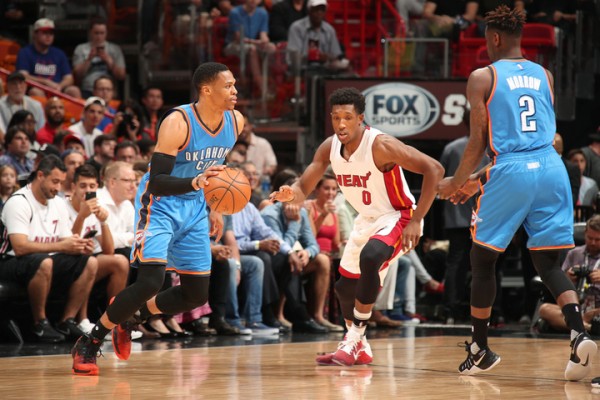 (Miami, FL) – Being on the wrong end of a pair of devastating first-half runs proved to be the difference as the Miami Heat dropped their second-straight game, this one a 106-94 decision, to the Oklahoma City Thunder at AmericanAirlines Arena on Tuesday night.

In the opening quarter, the Thunder controlled the boards, especially on the offensive side and closed out the final 3:52 of the period with a 15-3 run. Miami’s defense struggled to keep up, allowing Oklahoma City to finish the quarter shooting 56 percent from the field and holding a 33-19 lead.

“We’ve just got to come out with more urgency,” Josh Richardson said after the game.

The Heat started strong in the second period with seven unanswered points, but then watched the Thunder put together an 18-3 surge that gave them a 51-29 advantage. Miami improved on the offensive boards, but made no overall dent on the rebounding front. That helped Oklahoma City head to intermission up by 13 at 61-48.

“There were more than eight to 10 plays during the first half, where we were two feet on the ground, not putting ourselves out there making a play. You have to throw yourself out there,” Heat head coach Erik Spoelstra said afterwards. “I think the post ups really hurt us. (Enes) Kanter was in a great, great rhythm in that second quarter.”

Though the Heat were able to get the margin down to 11 during the course of the third quarter, they couldn’t break that double-digit threshold. By the time the horn sounded to end the period, the margin was 18 at 87-69, a deficit that was too much to overcome.

Like every other team this season, Miami was unable to stop Thunder point guard Russell Westbrook, who finished the night with his 15th triple-double of the season. Westbrook had already accomplished during the third quarter what’s become a nightly feat for him, finishing with 29 points, 17 rebounds and 11 assists.

“Some of the most impressive plays he made were diving for a ball in front of our bench, getting the charge when they’re up by 12,” Spoelstra said. “He’s competing to the very end. Every single possession is the most important possession to him. A great, great lesson to a lot of our young guys. What defines greatness is consistency.”

The injury-depleted Heat were without their star point guard Goran Dragic, who sat out the game with back trouble. That came in the wake of news earlier in the day that Josh McRoberts would be out indefinitely with a stress fracture in his foot.

“I just felt good on the court, I was attacking,” Richardson said. “My knee felt better today, but I wish we could still have gotten the win.”

One of four Miami players to score in double figures, Richardson was joined by Tyler Johnson with 17 and James Johnson with 16 points and five rebounds. Rounding out the quartet was Hassan Whiteside, who tossed in 12 points and snagged eight rebounds.

Speaking of Whiteside’s performance, Spoelstra indicated that his best effort came too late:

“I thought in the fourth quarter, he was making better impact plays and not all of them were successful,” Spoelstra said. “You could feel his presence more in the second half.”

Justise Winslow led the Heat in passing with five assists, yet again struggled from the field by connecting on just 2-of-10 during the game to finish with seven points.

With the Heat now possessing a 10-22 record on the season, they face a challenging stretch with eight road games in their next nine contests. The first of those will be at Charlotte on Thursday night, with tipoff set for just after 7 p.m.
[xyz-ihs snippet=”Responsive-ImagenText”]