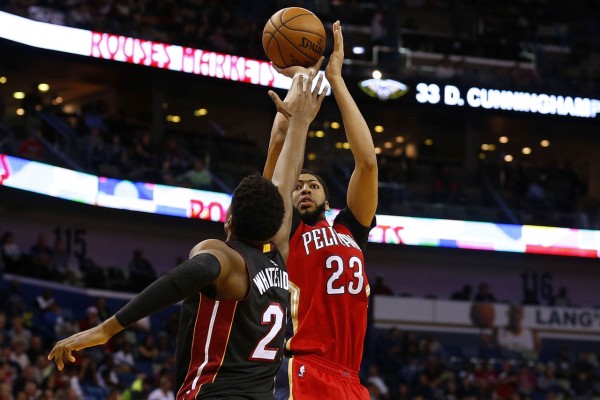 Goran Dragic set the pace for the Heat early as he scored 13 of his 23 points in the first quarter. He was effective driving the ball inside the paint and also made 2-of-4 from 3-point range.

“We were moving the ball really well in the first half and even parts of the third quarter. We were doing what we needed to do to make sure there was a coherence to our offense,” said Heat head coach Erik Spoelstra.

Even thought the Heat led for a majority of the night, they struggled mightily on offense when Dragic was not on the court. The point guard orchestrated the Miami offense to help build a solid 14-point lead in the third quarter.

When he went to the bench for a breather with about four minutes left in the third quarter, the Pelicans went on to make their biggest run of the game. Stretching from the end of the third quarter to the start of the fourth, the Heat allowed the Pelicans to score 15 straight points, including a buzzer-beating 3-pointer from Anthony Davis.

“Once we got the 14-point lead, we didn’t close out the way we needed to,” said Spoelstra. “Our offense really got stagnant…some tough, ugly possessions that allowed them to get some relief baskets and get closer. Then it became a ball game.”

After a quiet first half (nine points and seven rebounds), Davis erupted in the final quarter to lead his team to a stunning comeback. He ended the night with 28 points, 22 rebounds (a career-high) and four blocks. The Pelicans also got a significant contribution from veteran point guard Jrue Holiday who added 22 points and six assists.

On the other hand, the Heat were unable to execute down the stretch as they trailed by just three with just under a minute left in the contest. With exactly 48.6 seconds remaining, the Heat’s offense broke down and  Tyler Johnson was forced to take a tough midrange jumper that missed.

“At the end of the third (quarter) and the fourth (quarter) it seemed like it was zero-pass, one-pass options. We were even getting into our offense late,” said Spoelstra.

The Heat committed six of their 13 turnovers in the fourth quarter and only scored 19 points in the final 15:21 of the game.

“We need to be more mature on defense,” said Dragic. “Even if the offense is not going in the right direction, we still need to play defense.

The battle of the centers was clearly won by Davis on the evening because even though Whiteside was able to control Davis’ offensive abilities early, he was outmatched on both ends once the Pelicans center got into a rhythm. Whiteside ended the night with just 10 points (4-of-10 shooting), 18 rebounds and two blocks.

Up next, the Heat will travel back home to face off against the Oklahoma City Thunder on Tuesday night at American Airlines Arena.
[xyz-ihs snippet=”Responsive-ImagenText”]