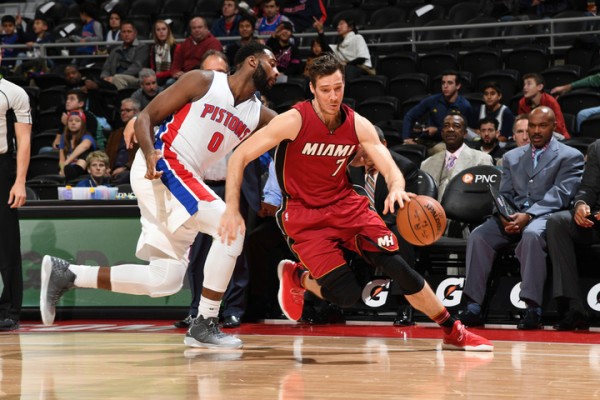 (Detroit, MI) — In a matchup that featured two of the best centers in the NBA, Hassan Whiteside was thoroughly outplayed by Andre Drummond as the Miami Heat (4-10) lost to the Detroit Pistons (7-9), 107-84, on Wednesday night.

The Heat opened its game against the Pistons much like it ended its loss against Philadelphia. It was completely out of sync on offense and made careless turnovers, as it committed 14 turnovers in the game, including 10 in the first half. The Pistons used those turnovers to speed up the pace of play and capitalize on transition opportunities.

With the Heat down 15 points early, Heat head coach Erik Spoelstra went to an all-bench lineup to try and spark the Heat offense. Led by Tyler Johnson, the Heat went on a 17-5 to cut the Pistons lead to three with 7:24 left in the second quarter.

That would be the closest it would get to retaking the lead for the rest of the game.

“We tried to battle back with the second group and it’s not all on the starters. Because in the third quarter, they went on a big run again,” said Johnson.

Detroit used a 16-4 run at the end of the first half and another 20-6 run to begin the third quarter to blow the game wide open. The Pistons ran its offense through Andre Drummond and Kentavious Caldwell-Pope during those critical stretches in the game.

Drummond absolutely dominated his battle with Whiteside by scoring 18 points to go along with 15 rebounds, four steals and four blocks. Coming off of a career-high 32 points against Philadelphia, Whiteside did not even attempt a shot until halfway through the second quarter and ended the night with just six points and eight rebounds — both of which were season lows.

Whiteside was not effective in defending around the rim, as the Pistons was able to score 60 points in the paint on the night. In fact, the Heat defense, which was second best in opponent field-goal percentage in the NBA before tonight’s game, allowed Detroit to shoot 49.4 percent from the field.

“It always starts with effort and toughness,” said Spoelstra on fixing the defensive lapses. “Particularly the last two games when we’re flat offensively like this. If we have a (good) game defensively it can go the other way pretty quickly.

“We played flat. The starters didn’t have any zip or life to them at the beginning,” said Spoelstra. “It was not a good game.”

The Heat will continue its road trip on Friday against the Memphis Grizzlies.
[xyz-ihs snippet=”Responsive-ImagenText”]