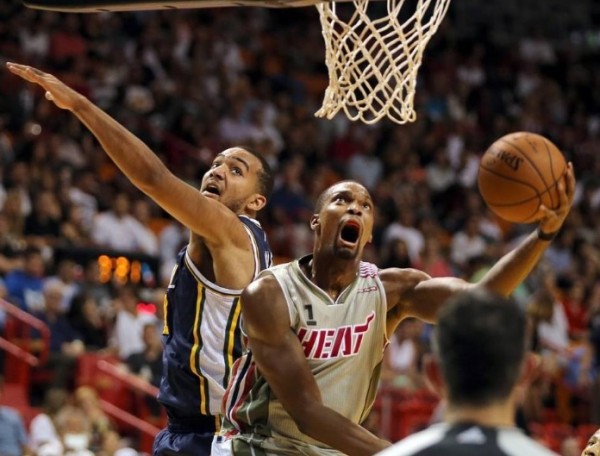 (Miami, FL) – Solid fourth quarter defense and a near double-double from Chris Bosh helped the Miami Heat win their third consecutive game with a victory over the Utah Jazz at AmericanAirlines Arena on Thursday night.

The Heat had held the Jazz to just seven points over the first seven minutes of the fourth and then turned a tie game into a nine-point lead at 79-70. That cushion would be needed as Utah made a late comeback that got them twice to within two points, but the rally eventually came up short.

Goran Dragic clinched the game by connecting on four of six free throws in the final period, with all of them needed as the Jazz’s Alec Burks hit a three at the buzzer. Dragic finished the night with 14 points, dishing out all four of his assists during the first half.

Another Burks shot attempt that came at a crucial time, this one on a drive to the basket, was slapped away by Bosh with 22.8 seconds left. That turned into the first of Dragic’s free throws with 19.9 seconds to play and helped Miami improve its record to 6-3 on the year, while the Jazz dropped to 4-4 for the season.

Bosh finished the evening with a team-high 25 points, while adding eight rebounds, four assists and four blocked shots. Immediately after the game, he was asked about the team establishing themselves on their homecourt:

“I think we’ve done a good job. The energy has been good,” Bosh said. “We made a lot of mistakes tonight, but it’s good that we were able to get past it. Plus, a win is a win.”

Dragic didn’t speak much about the fact that he hasn’t seen his family for three months, but will be reunited with them this weekend:

“It will make things so much easier,” said Dragic.

Reserve Tyler Johnson also played an important role in the win, hitting the last two field goals of the night for Miami, the last coming with 38.1 seconds left to double the Heat lead to four at 88-84.

“He makes you watch him and he makes you play him,” Spoelstra said. “He’s a beast behind the scenes.”

Each team was missing a starter for the contest, with Miami not having guard Dwyane Wade due to his son’s hospitalization. Meanwhile, Utah was without center Rudy Gobert, who had suffered an injured ankle in the team’s Tuesday night loss in Cleveland.

Spoelstra made a point to mention that Wade was never far from the team’s mind during the night:

“I’d like to send a shout out to Dwyane Wade and his family,” said Spoelstra. “Hopefully they were able to watch this one and enjoy it.”

Despite Gobert’s absence, the Jazz had the edge in the battle of centers as Derrick Favors moved over from power forward and came up with a double-double with 25 points and 11 rebounds, while also adding seven blocked shots. Hassan Whiteside nearly managed a double-double of his own, with nine points, 14 rebounds, and five blocks.

The trio of Favors, Gordon Hayward and Burks provided the bulk of the Utah offense, combining for 73 of the 91 Jazz points—80 percent of the offensive output on the evening.

Miami will now have an extended break, with their next game set for next Tuesday, when they continue their homestand against the Minnesota Timberwolves in a game set to tip off just after 7:30 p.m. ET.[xyz-ihs snippet=”Responsive-Ad”]