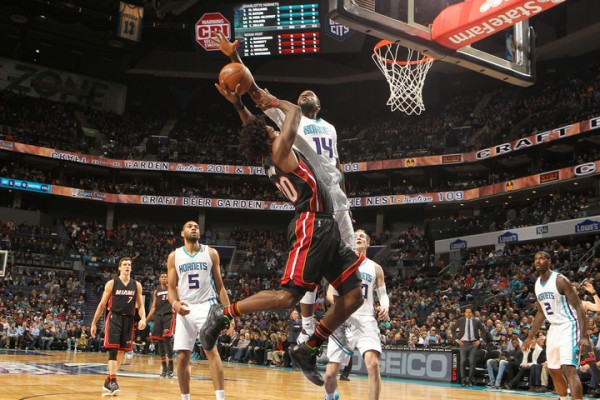 (Charlotte, NC) – For the sixth time in their last seven contests, the Miami Heat (10-23) sputtered to yet another loss as they fell 91-82 to the Charlotte Hornets (19-14) at Spectrum Center on Thursday night.

The Hornets flexed their muscle in the second half as they outscored the Heat 49-33 with starter Nicolas Batum nearly racking up a triple-double with 16 points, 13 rebounds and eight assists in a stellar defensive team effort.

Hornets point guard Kemba Walker, who led all scorers with 22 points, seven rebounds and four assists on the night, helped Charlotte notch its fifth win in its last six games.

“They scored only 82 points. We did a good job,” Batum said. “We were tired from the last two games that were on the road, but we ground it out. That was a good win for us.”

The Hornets, who faced a 49-42 deficit at halftime, really kicked things into gear in the third quarter as they started the frame on an 8-0 run and outscored the Heat 31-17.

For the Heat, guard Josh Richardson had himself another 20+ point game with 20 points (8-of-14 shots made from the field) to go along with four boards and two assists, while reserve guards Tyler Johnson and Wayne Ellington came off the bench to score 18 and 12 points respectively.

“I think I played alright,” Richardson said after the game. “The big thing was that I was competing all night and I felt that I was moving well, that was probably the biggest thing about it.”

Richardson, who had 13 points in the second quarter on 5-of-7 shots from the floor, was one of Miami’s lone bright spots during its third-straight loss.

“I don’t know, I think they were just attacking,” Richardson said. “I think we just had a tough start to the (third) quarter again. I don’t think we came out with enough urgency, we relaxed a bit.”

Up next, the Heat will stay on the road Friday night when they take on the Boston Celtics (19-13) at TD Garden. The contest, which will tip off shortly after 7:30 p.m. ET, will be broadcast live locally on Fox Sports Sun.
[xyz-ihs snippet=”Responsive-ImagenText”]