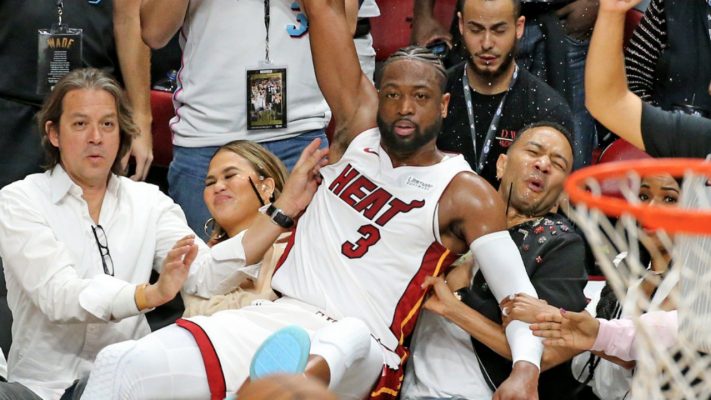 When he appeared on “The Tonight Show With Jimmy Fallon,” Wade took the time to discuss his retirement, his family, and of course the hilarious picture of himself, Legend, and Teigen which went viral following the game.

“For all the kids out there, look at the focus,” Wade began. “I ain’t worried about nothing. I am focused. Look at the follow through. Luckily, I said this to John. Lucky that we’re friends first of all, but I do owe them some vodka and all that that was spilled. Whatever was spilled on my back, I owe that to them.”

He then broke down what was going through his head in the exact moment that he fell back onto the two superstars.

“The ball went in and out so I was really focused and looking,” he explained. “And when I turned around I saw who it was and was like, ‘Oh my goodness.’ I couldn’t believe it was them.”

Finally, Wade pointed out one final hilarious aspect of the picture involving his wife, Gabrielle Union.

While Wade’s final season in the NBA did not end in the playoffs as many had hoped, it was still a wonderful sendoff nonetheless.

Now, with his NBA career behind him, Wade will have a lot more free time to figure out ways to pay Legend and Teigen back for their lost drinks.
[xyz-ihs snippet=”Hn-Responsive-EOA”]