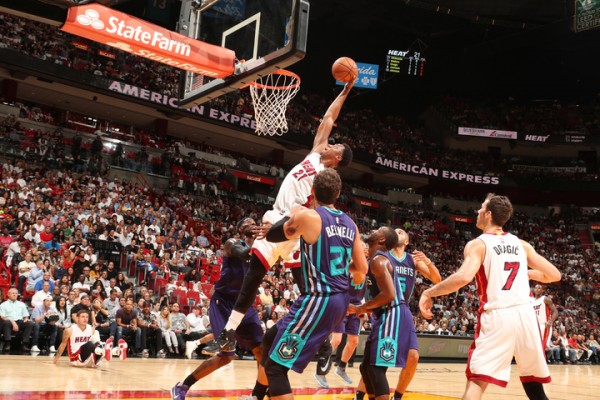 (Miami, FL) — The last time these two teams faced off against one another, it was Game 7 of the first round of the NBA Playoffs; a series in which the Miami Heat won. It took nearly six months, but the Charlotte Hornets just got a taste of revenge, as they beat the Heat in Miami Friday night, 97-91.

After starting strong in this one, the Heat fell apart late and were unable to withstand the eventual barrage of scoring by the Hornets.

Miami looked very well-balanced on offense in the first half and had built a 19 point lead early in the third quarter.

Then Charlotte began to mount a furious comeback.

Led by Kemba Walker and Jeremy Lamb, the Hornets roared back and eventually took a late fourth-quarter lead. From there, they never looked back. The Heat were ultimately outscored 31-56 in the second half after outscoring the Hornets 57-46 in the first half.

“They really stepped up their defense and made it tough for us, particularly in that fourth quarter,” Heat head coach Erik Spoelstra said after the game. “It wasn’t a matter of want or competitiveness, our guys were super competitive in this game, we just need to clean up a few things offensively to help.”

Miami displayed great versatility and efficiency as it pertained to their offense until things got ugly. In fact, four Heat players, led by Hassan Whiteside‘s 20 points, scored in double-digits for the second game in a row. Despite the strong outing early, Spoelstra elected to keep Whiteside on the bench while the Hornets mounted their late comeback.

“I can’t control my minutes. That’s Coach Spo,” Whiteside said of the late benching. “I really can just cheer from the sideline.”

Eventually Spoelstra put Whiteside back in, but it may have been too little, too late.

“I just wanted to make sure he could finish the game,” Spoelstra said. “In hindsight, there’s a lot of decisions you can go back on.”

Eventually, the visiting team’s execution and improved defensive prowess just won out. A visibly despondent Goran Dragic spoke to the media about the late meltdown after the game:

“We just collapsed, we didn’t make shots. We didn’t communicate on defense, our defense was really bad and then they won the game,” said Dragic.

Walker led his team with 24 points, four assists and two steals while Lamb chipped in with 12 points and six rebounds. Their late-game efforts were the difference makers where each team only managed to shoot slightly above 37 percent on the night. In addition, Miami was only able to manage 28 points in the paint after they had scored a franchise-high 74 points in the paint Wednesday night in Orlando

The Heat will look to bounce back in their next game, but host a tough competitor in the San Antonio Spurs on Sunday afternoon.
[xyz-ihs snippet=”Responsive-ImagenText”]