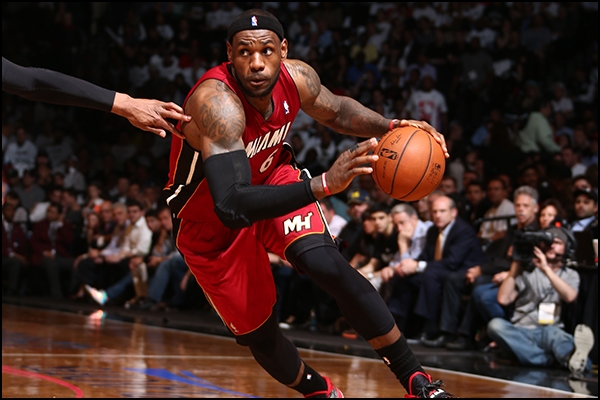 (Brooklyn, NY) — In the words of Zach Lowe, “Sometimes the thing that matters most is that one team has the best player in the world, and the other team doesn’t.”

Immediately following Game 2, Paul Pierce went up to Head Coach Jason Kidd and said, “I want that assignment,” referring to the defensive assignment on LeBron James.  Pierce continued, “I think I’ve guarded him more than anybody in this gym.  I know his tendencies a little bit more and I [want] to step up and lead the role that way.”

Fast forward to Game 4, and it was evident that LBJ got the memo, as if to say, “So you think you can guard me one on one?”  The King made sure to send a message with authority.  Breakaway dunks, silky, agile drives through the key, tough fade aways, and bombs from deep that hit nothing but net, there was no stopping James on this particular eve.  LeBron went off to the tune of 49 points on an incredible 16-24 shooting clip, while going to the line 19 times, showing how aggressive and in attack mode he was.  When asked about how he was able to be so effective and make it look so easy tonight, James said, “I’m happy I was able to make enough plays for our team to win.  It definitely wasn’t easy.  It may look that way, but it was hard work and dedication by all our guys.”

LeBron actually had a chance to set a new playoff career high and end the game with 50, but split a pair at the line with 1.1 seconds remaining in the game.  When asked about this, James responded with, “That’s the first time that I’ve been disappointed in myself on a win…it’s a free throw, and I hate missing free throws.” Needless to say, Pierce finished the game with 16 points seven rebounds, five fouls, and a severely bruised ego.

The fourth quarter was a nail-baiter that never saw a team lead by more than three points, save for garbage free throws at the end of the game.  After a Paul Pierce and-one to put the Brooklyn Nets up one with 4:25 remaining, LeBron nailed a go-ahead three pointer from about 28 feet out to put Miami up two.  On the ensuing possession, James picked up his fourth foul and then a couple possessions later, he picked up his fifth.  Joe Johnson, who finished the game with 18 points on a horrendous 5-15 shooting from the field (mostly because he was being guarded by James), said he wasn’t “necessarily” trying to draw a sixth foul on LeBron.  “I wasn’t necessarily trying to draw a foul on him, but i thought he was being aggressive so i tried to use his aggressiveness against him.”

This plan of attack was to no avail, as James made Johnson take a difficult fade away shot with a couple minutes to go.  James said, “I take pride in my defense just as much as I do offensively.  I believe in a one-on-one situation I can stop anyone from scoring.”

With 1:15 remaining in the game, the Miami Heat were poised for a story book ending.  Dwyane Wade, who finished the game with 15 points, four rebounds, and three assists, passed the ball to LeBron, who was quickly crowded in the painted area.  After what seemed like a broken play out of a timeout, James found Mario Chalmers on the right wing, who quickly swung it to Chris Bosh in the right corner and from there it was all she wrote.  Bosh nailed a critical three point shot to put the Heat up for good and although LeBron scored 49 points, Bosh’s three was the most important of them all.

After the sequence had begun, James was asked about his thoughts when the ball started going in Bosh’s direction.  “Me setting the high pick and roll for D-Wade and they kind of messed up the coverage, so D-Wade hit me in the middle, I attacked KG and I knew what was about to happen.  I spun in the paint and threw it to Rio, I knew it was gonna be good from CB.”  Bosh finished the game with 12 points, five rebounds, and three huge blocks.

The night before, James preached that his team needed to play better defense in order to win Game 4, and that’s exactly what they did.  After shooting 15-25 from three point land the night before, the Nets shot a mere 5-22 from the land of beyond, while shooting a total of 43.6% from the field as opposed to Miami who shot almost 53% from the field.

Game 5 is at home in what could be a close out game.  LeBron stated the keys to the game perfectly.  “Win.  Play with a sense of urgency.  Help each other and communicate.  We do those things, we do it with a clear and aggressive mind, we give ourselves a good chance to win.”