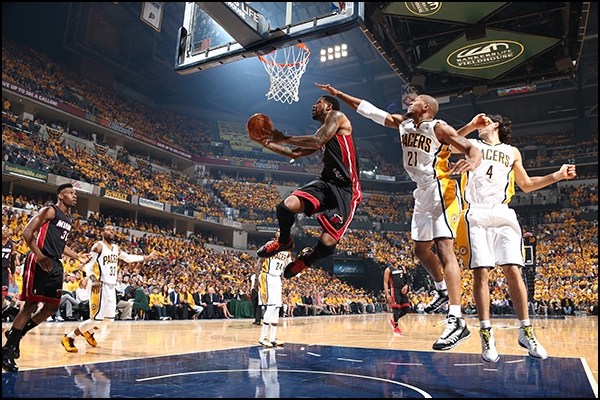 (Miami, FL) — Despite the “foul” trouble of LeBron James throughout Game Five of the Eastern Conference Finals, the Indiana Pacers couldn’t come away with an overwhelming sense of victory and hope for the series, as the Miami Heat hung around with James was glued to the bench.

The Heat fell to the Pacers 93-90 in Game Five, forcing the two-time defending NBA champions to seek refuge (and a series clincher) in game six, Friday night in Miami.

As James spent quality time on the bench throughout a majority of the second half with five fouls, the Heat still made what could’ve been a home-favored blowout into a sweat-drenched stress-fest for the Pacers faithful, overcoming a lopsided 31-15 third quarter behind a barrage of three-pointers to remain within striking distance of a series-clinching win. However, the Herculean efforts of George during the fourth quarter (21 of his 37 points in the final 12 minutes) gave the Pacers a last gasp for playoff breath and Indiana will undoubtedly have to bring more than late-game heroics to upend a still-confident Heat team.

“We still had enough opportunities to come away with a win…we just couldn’t get over the hump,” Heat Head Coach Erik Spoelstra said following the game five loss.

Overcoming that hump will certainly involve keeping James on the court more often this time, as the former MVP played only 24 minutes in the loss. With forward Chris Andersen (left thigh contusion) out for the past two games, the sharp shooting of Rashard Lewis from Game Five (18 points, 6-of-9 from three in the starting lineup) is critical for Friday’s contest, considering how non-existent Shane Battier has been in this series. Besides Ray Allen’s consistent play off the bench (11 points per game), the Heat will need a collective effort to put the desperate Pacers away for good.

The 15-of-31 outburst from beyond the arc was certainly an impressive statistic for the Heat in game five, but the assertiveness on offense that the team showed in the three wins will be crucial to avoid a nerve-wracking game seven. With only eight free throws attempted Wednesday night, Spoelstra stresses for his team to play “five-man basketball” again.

“We have to work together to get opportunities in the paint,” Spoelstra said following Thursday practice. “We played [game five] more on their terms, even though we had a chance to win. We want to be able to see if we can get [game six] on our terms.”

Udonis Haslem was missing from the starting lineup for the second straight game, as the Heat again opted to stretch the floor with Lewis joining James at the forward position. Despite Spoelstra’s desire to attack the paint more with better ball movement, the Pacers should remain concerned with the Heat’s vast array of three-point shooters.

“They’re gonna shoot 30 threes…we gotta make sure we’re contesting on the perimeter and not put them to the line,” Pacers Head Coach Frank Vogel said following the Pacers’ Thursday practice.

While Vogel focuses on how 30 three-point shots can wipe out his team, Pacers guard Lance Stephenson remains focused, solely on James, as he should continue to do so in game six. James, in all, is not concerned with the depths of Stephenson’s taunting, which included blowing into James’ ear while the ball wasn’t in play, and listening in on the Heat’s huddle during a timeout.

“I’m just trying to win,” James said. “We need one more win to get to the Finals. That’s my only concern. All the extra stuff, whatever Lance (Stephenson) wants to do, I don’t really care about that.”

James’ focus should instead be on frustrating George into a bad shooting night, as the Pacers’ leading scorer has shot over 50 percent from the field in three of the five meetings. Overall, the Heat’s front court will have to put more attention into corralling the big bodies of David West and Roy Hibbert, who came together for 29 points and 22 rebounds in Game Five. While West has averaged 16.6 points per game and eight rebounds in the series, Hibbert’s inconsistent habits on the scoreboard go a long way in determining which Pacers team shows up for game six. When Hibbert has his way on both ends of the floor, as evidenced in his 10 points and 13 rebounds on Wednesday, the Pacers are primed to control the tempo, something Chris Bosh is strongly aware of.

“We kinda played their style (in Game 5),” Bosh said. “We gave away 16 offensive rebounds and a lot of second-chance points.”

Bosh’s 20 points and 10 rebounds in game five finally solidified his arrival as a factor in this series, considering Bosh went over two months without consecutive 20-point games. Falling one three-pointer short of a third straight elimination of the Pacers Wednesday night, Bosh and the Heat return to South Beach understanding how close they were to a 4-1 series win. Despite the loss, the Heat knows how close it can be to history with just one more win, which would mark Miami as the first team to reach the NBA Finals in four consecutive seasons since the Boston Celtics from 1984-87.