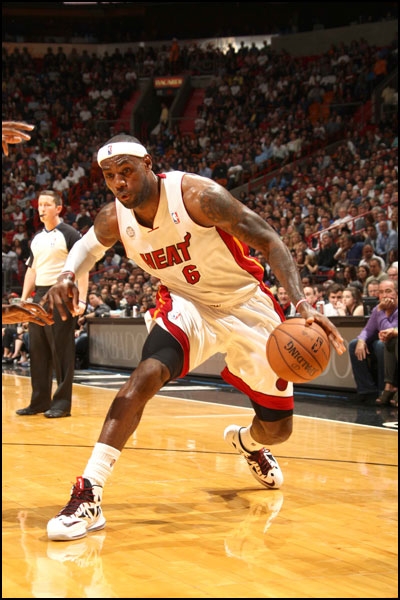 Photo by Issac Baldizon: "James is averaging 24.8 points, 9.1 rebounds and 6.6 assists per game, all of which are a team high for the defending NBA Champions."

As expected, the Miami Heat are atop the Southeastern Division at 9-3 and play 10 of their next 11 games at home.

Miami is coming off of a victorious 113-106 overtime battle with the Milwaukee Bucks to improve to a 9-3 record that saw the “Big Three” of Chris Bosh, Dwyane Wade, and LeBron James combine for 80 points.

With the win and the New York Knicks’ loss to the Houston Rockets on Friday, Miami has taken over the top seed in the Eastern Conference.

The time has come in the season for one of the two times that James  squares off against his hometown team, which he left for Miami as a free agent in controversial fashion during the 2010 summer of LeBron and “The Decision.”

James is averaging 24.8 points, 9.1 rebounds and 6.6 assists per game, all of which are a team high for the defending NBA Champions.

Flying under the radar of his star-studded teammates, Bosh is quietly having a solid season by adding 20.0 points and 8.2 rebounds per game both are second on team behind James.

He has handled inferior competition at the center spot, but might struggle against Cleveland center Anderson Varejao, who is always active on the boards, and a scrappy defender willing to throw his body in front of oncoming attackers to protect the rim.

The Cleveland Cavaliers have struggled this season, losing five of their last six games, and their grim outlook only worsened when their 2012 Rookie of the Year point guard Kyrie Irving went out with a bruised finger.

With the concern of further injuring the finger that would require surgery, Cleveland is playing it cautious with Irving by sitting him out a few weeks before re-evaluating the extent of the injury.

The 6-foot-3-inch second year player from Duke is averaging 22.9 points and 5.6 assists per game to lead the Cavaliers.  Jeremy Pargo has filled in nicely for Irving, averaging 21.5 points per game in his past two games that he has started.

With a longstanding career with the Cavaliers, Varejao is a fan favorite and a former teammate of James in Cleveland.

The Brazilian center is having a career year to lead the Cavalier post players averaging 13.9 points and 13.7 rebounds per game trailing only Zach Randolph by .1 for the league lead in rebounds.

Rookie Dion Waiters of Syracuse has fed off of the attention that Irving commands from perimeter defenders averaging 13.9 points per game and connecting on 42.3 percent of his shots from deep.

Waiters is a slasher, and his game mirrors that of the Heat’s versatile guard Dwyane Wade, who is coming off of a 28 point effort on 11-of-21 shooting against Milwaukee.  With Wade returning to the starting lineup against the Bucks after missing two games, this will be the matchup to watch as both players will go back-and-forth attacking the rim.

Cleveland is one of the youngest teams in the league with three of its starters either rookies or second year players, but Cleveland’s Head Coach Byron Scott does not make excuses for his players inexperience and holds them accountable for all of their mistakes.

A former Lakers’ guard and teammate of Magic Johnson, Scott coordinates a fast paced system offense that resembles that of Mike D’Antoni, who is now with the Los Angeles Lakers. Similar to Miami, Scott’s Cavaliers focus on creating turnovers from relentless defensive pressure, and using their athleticism to get out and run in transition.

The styles of both teams are identical but the talents of the personal on each team are drastically different.

The Cavaliers are coming off of a tough 108-104 loss in Orlando, falling to 3-9 overall with Varejao adding 19 points and 17 rebounds, 11 of which came on the offensive glass to extend the play.  Waiters led Cleveland with 25 points and added 5 assists, while Pargo filling in for Irving had 15 points in the losing effort.

Even without their best player, Cleveland will give Miami everything they have, especially with James’ former teammates Anderson Varejao and Daniel Gibson setting out to prove they can carry on with life without LBJ.

Expect a fast paced, yet scrappy and confrontational game that will come down to the Heat’s ability to continue to make outside shots, while holding opposing centers in check.

Also be sure to check out the Heat’s new “White Hot” jerseys that they will be debuting in the game Saturday night and will periodically adorn during home games this season.