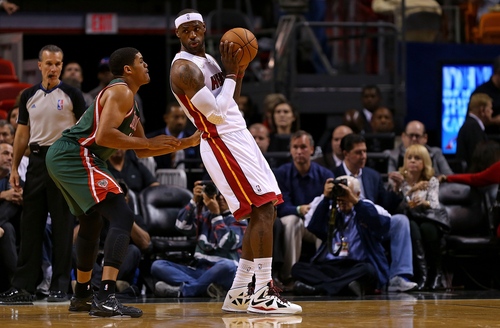 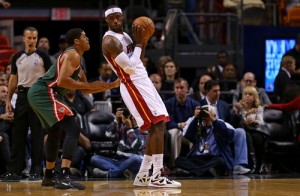 Getty Images, "The Heat starters combined for 80 points Wednesday night to lead Miami to a 113-106 overtime win over the Milwaukee Bucks to improve to 5-0 at home and 9-3 overall."

There were blown leads, bad turnovers, and generally sloppy play by the Miami Heat in their first game back after a six-game road trip.

But in the end, the Heat’s Big Three of LeBron James, Dwyane Wade, and Chris Bosh can wash away a multitude of sins.

The Heat starters combined for 80 points Wednesday night to lead Miami to a 113-106 overtime win over the Milwaukee Bucks to improve to 5-0 at home and 9-3 overall.

James finished with 28 points, 10 rebounds, and eight assists on 11-of-21 shooting, and had 10 points and three assists combined in the last 5:18 of regulation and overtime, and even guarded speedy Bucks point guard Brandon Jennings down the stretch.

“I’m OK with that,” James said of his typically heavy workload.  “That’s who I am and that’s the makeup of my game.”

The Heat appeared en route to an easy win early on, leading by 18 points on three different occasions, including 41-23 with 7:11 left in the second quarter.

But the Bucks stormed back with a 21-5 run to close the half, with a long three-pointer by Samuel Dalembert at the first half buzzer cutting the Miami lead to 46-44.

Milwaukee went up by as much as seven in the second half and led 91-84 with 4:50 left in the fourth quarter.

But James spearheaded an 8-0 spurt, making a three-pointer from the top of the key and assisting on consecutive baskets, with a Ray Allen corner three-pointer putting Miami up 94-91 with 2:47 left in regulation.

The Bucks did not go away, however, getting a key three-point play by Mike Dunleavy and a bucket by Ekpe Udoh to go up 98-96 with 47 seconds left.

James tied it back up by rebounding and putting back a missed Bosh three-pointer, and a last-second attempted game-winner by Milwaukee’s Monta Ellis was missed, as was the attempted follow by John Henson.

The overtime period belonged to the Heat, who scored nine of the first 11 points of the extra session, with another Allen triple making it 109-100 with 1:07 to play.

Allen finished with 17 points off the bench, while Wade had 28 points and Bosh posted 24 points and 18 rebounds.

Jennings had 19 points, seven rebounds, six assists, and five steals, but made just 9-of-25 shots, while the rookie Henson had a career game with 17 points and 18 rebounds in 27 minutes off the bench.

It was a game the Heat appeared to have control of early, but as has become a trend early in the season, double-digit Miami leads have a tendency to evaporate quickly.

“I guess we like close games,” James said.  “We came out for a quarter-and-a-half and played good basketball and then just got lax offensively and had turnovers to let them back in the game. But we can’t practice bad habits like we did in the second and third quarter.  We’ve just got to continue to get better.”

It was a special night for Heat veteran Udonis Haslem, who passed Alonzo Mourning on the franchise’s all time rebounding list, with the Miami legend Mourning in attendance to watch his former teammate and protégé break his record.

For Haslem, having the man he has viewed as a mentor in the building to watch made it all the more special.

“It was huge,” he said.  “I’ve always looked up to Alonzo Mourning. He taught me a lot about work ethic and professionalism and being a warrior. I try to follow in his footsteps and bring that intensity to the game.”

James, who has only been a teammate of Haslem’s for three of the Miami power forward’s 10 years with the organization, said that the achievement was especially impressive given the long road he took to get there.

“It’s amazing. It’s a testament to a guy who was always being counted out for being undersized,” he said.  “Through hard work and that warrior mentality, he’s gotten this unbelievable achievement. He should be proud of himself.”

Miami outshot Milwaukee from the field 47 percent to 42, and shot 21 more free throws as well.

But 15 Heat turnovers led to 23 Bucks points to keep it close, while Miami only got nine points off of 11 Milwaukee turnovers.

On the bright side for Miami, its much-maligned three-point defense finally yielded positive results, holding the Bucks to 5-of-29 from long range.

By contrast, the Heat made 8-of-18 from distance.

Miami will next play host to the Cleveland Cavaliers on Saturday in the second of four consecutive home games.