Don't Miss
Home / Editorials / Synergy Breakdown: Which Lineups Have Been Most Effective for Miami Heat?

Synergy Breakdown: Which Lineups Have Been Most Effective for Miami Heat? 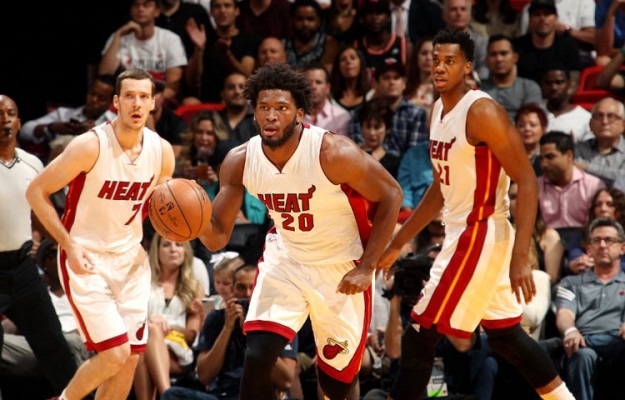 In a season filled with drama and problems for the Miami Heat, are there any possible solutions?

It is clear the offense has been the team’s weak point this season, but what has the offense done well so far and what options does Heat coach Erik Spoelstra have at his disposal?

During the preseason, Spoelstra knew he would be experimenting with lineup changes when he spoke to the Palm Beach Post.

“I think what I’ll do is pick a rotation of guys and this is who we’ll play just to get whatever we need to out of that evaluation and to make sure that they’re getting rhythm minutes,” Spoelstra said. “And then we’ll change it up for the next game.”

Without Chris Bosh and Dwyane Wade, Spoelstra is limited in terms of personnel. However, certain lineups have yielded more efficient results than others.

According to Synergy.com, the Heat lineup of Rodney McGruder, Josh Richardson, Dion Waiters, Hassan Whiteside, and Derrick Williams has given the team its most efficient offense by shooting 54 percent from the field in three games.

Because the Heat has the third worst-scoring offense in the NBA, this lineup’s success should not be ignored. The Heat’s second-most successful lineup offensively features Whiteside, Waiters, Goran Dragic, Tyler Johnson, and Justise Winslow and has shot 52.5 percent.

The second lineup seems to be the most balanced group offensively and defensively, but due to injuries to Dragic and Winslow, this lineup has only been together for six total games this season.

Although these two lineups are the most offensively efficient, how should they be used to maximize their offensive outputs? Which plays have produced solid numbers and which ones should be placed in the back of the play-calling queue?

Despite Whiteside’s presence, the Heat are still second-to-last in the NBA in field-goal percentage when running the post-up play — at 35.1 percent. Having one of the premier centers in the league while shooting so poorly compared to the rest of the league shows Whiteside’s deficiencies as a post-up player.

Another play hurting the team’s offense is the spot-up jumper, with the Heat shooting just 32.9 percent from the field — good for dead last in the NBA.

Coupled with the spot-up jumper, the isolation play is yielding little success at a 35.3 percent clip. The reason for this?

Yes, it sounds dramatic and as if Heat fans cannot stop living in the past, but cause-and-effect relationships are devoid of bias. The Heat shot 35.3 percent on isolation plays last season as well — with Wade and Bosh. Whereas the Big 3 together gave the offense three options in isolation.

Conversely, the Heat’s roll men — players moving towards the basket on pick-and-roll plays — currently sport a 48.9 field-goal percentage, and plays off of screens have led to 49.2 percent shooting from the field

Dragic is the team’s best ball-handler and Whiteside sets the most effective screens. Although Whiteside should not be fed in the post frequently, he is still the most impactful player on offense.

As a result, the Heat’s starting point guard and center should be the offense’s two most critical players.

At 5-12, the Heat has the third-worst record in the Eastern Conference. Injuries and transitioning to a new era of basketball are valid reasons in understanding the team’s struggles thus far. However, the Heat’s season is still salvageable if the offense can increase its efficiency while the defense shows up.
[xyz-ihs snippet=”Responsive-ImagenText”]