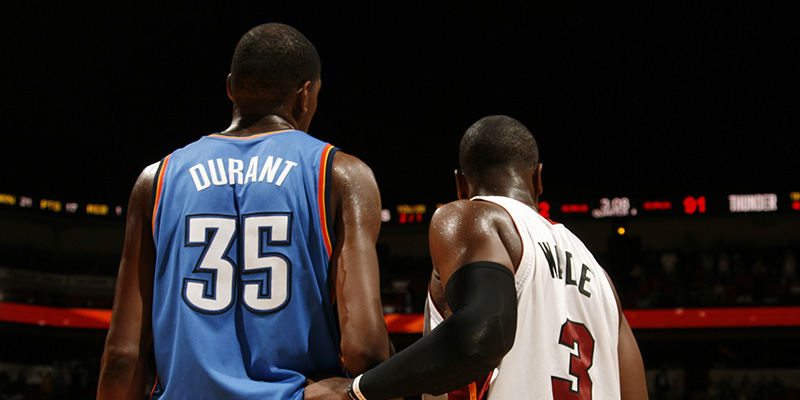 It’s no secret that free agency will be a frenzied affair in 2016 with teams chomping at the bit to sign Kevin Durant. Over the past year or so, we’ve heard rumors that both the Miami Heat and Washington Wizards would be KD’s top choices if things don’t work out in Oklahoma City.

It seems that the rumor mill isn’t slowing down anytime soon.

As of yesterday, ESPN’s Akash Malhotra tweeted out this:

Sources close to the situation say if KD does decide to leave he will be considering Washington and Miami the highest. Will listen to teams.

This only adds more fuel to the Durant/Miami fire as multiple sources report that the former MVP shows genuine interest in signing with Pat Riley’s squad.

The Heat will have $37.4 million in cap space in 2016 and can offer Durant a four-year deal if he chooses to leave OKC. The Thunder can offer him a max contract for five years but may have to dig deep into the luxury tax to do so.

The real conundrum for Miami is squeezing in contracts for both Dwyane Wade and Hassan Whiteside in 2016. If Whiteside lives up to expectations this year, he could be fielding some serious offers from around the league come next summer. It goes without saying though, if anyone can make it work, it’s Riley. He and his front office have always been able to work out free agency miracles and you can bet he intends to part the Red Sea for Durant next year.

KD’s other top destination is likely his hometown of Washington D.C. where he’d suit up with the Wizards. There is something to be said about going back to your roots and playing for the home crowd but Durant might elect to head somewhere where he’d have more control of the ball.

John Wall and Bradley Beal currently run the show in D.C., which might mean Durant could see even less touches than he does in OKC with Russell Westbrook throwing up 20+ shots a game.

Heat fans have a saying, “In Pat We Trust,” and Riley hasn’t let them down yet. When the 2016 offseason arrives, the floodgates will burst open for the Kevin Durant sweepstakes and you can bet the house on Pat Riley leading the charge.
[xyz-ihs snippet=”Responsive-Ad”]