Why The Miami Heat Should Aim For The Seventh Seed 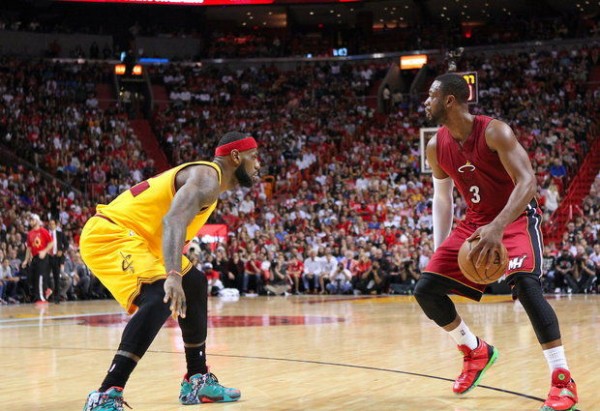 When it comes to the 2015 NBA playoffs, the Miami Heat are just hoping to sneak in.

At the current moment, the Heat are 34-40 with eight games remaining. If the playoffs started today, they would be the seventh seed. The Milwaukee Bucks, despite winning just two of their last 10 games are marked down as the Eastern Conference’s sixth seed at a record of 36-38. Meanwhile, the Brooklyn Nets lag just a half-game behind Miami as the conference’s eighth seed at 33-40.

The 2014-15 season hasn’t been just one marked with mediocrity for the Heat—it’s been a season filled with frustrating play. It’s hard to grasp this statistic, but it’s one that displays just how below-average Miami has been this season. The Heat have yet to win more than three consecutive games this year.

You can pinpoint many reasons for the team’s disappointing play—the defection of LeBron James, the injuries to Josh McRoberts and Chris Bosh, or simply the lack of chemistry for a team that had a major overhaul at the trade deadline.

After the Heat fell to the San Antonio Spurs on Tuesday night, Dwyane Wade couldn’t help but comment on the team’s lack of ability to stay healthy:

“The people [who are] playing, it’s not that they’re healthy. They’re just good enough to play. … Is it mind-boggling every day when we walk in here and we don’t know who is going to play? Yes, it has been different. It has been a bizarre season, and we’ve just got to keep going until we can’t anymore.”

Luckily for Miami, though they dropped into a tie with the Nets in the loss column, they do hold the tiebreaker over Brooklyn. However, teams such as the Boston Celtics, Indiana Pacers and Charlotte Hornets lag two-and-a-half games or less behind the Heat for one of the East’s last two playoff spots.

Furthermore, Wade isn’t a big proponent on playoff seeding. He just wants to get in. Following the Heat’s 93-75 loss to the Oklahoma City Thunder on March 22, the shooting guard had this to say about seeding:

“When you look at it, you wanna see who wins and loses. For me, we gotta win basketball games. It’s only as important as how many games you can win. When you get done is where you end up. We are trying to win every one so seeding is not that important. I don’t think it really matters because you just wanna be in the playoffs. Wherever you end up is what you deserve.”

While the team has been less than stellar in 2015, it doesn’t mean they should give up all hope. Anything can happen in the playoffs.

Since anything can happen in the playoffs, the Heat are right where they need to be—at the seventh spot.

Heat personnel and Heat Nation should hope Miami enters the playoffs where they’ve been slotted for most of the post All-Star break.

Why? The Cleveland Cavaliers are slotted at the second spot in the East.

If Miami has any sort of chance of knocking off one of the higher seeds in the first round, it would be none other than the Cavs. 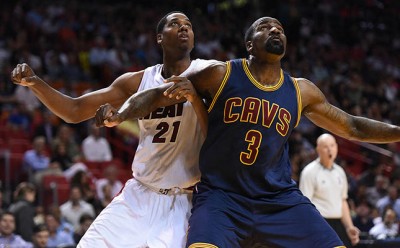 Center Hassan Whiteside has been giving the Cavs problems all season long.

The Heat hold a 2-1 series lead over Cleveland this season, with convincing victories on Christmas Day (101-91) and March 16 (106-92). Both teams will cap the season series when they play on Thursday night at Quicken Loans Arena.

Heat fans came to the realization a long time ago that this team wasn’t going to win a championship. Hell, it would be considered an accomplishment for this team just to make the postseason after everything this organization has gone through.

However, you don’t play 82 games just to say you made it. Heck, the Heat are four-time Eastern Conference defending champions, so there’s a little bit of pride that comes with the territory.

Despite Cleveland being considered one of the hottest teams in the calendar year of 2015, Miami has shown the ability to match up with them well.

In the two teams’ recent meeting on March 16, the Heat led 56-38 in the second quarter and by as many as 25 points in the third quarter. LeBron was held to just of 8-of-19 shooting while Kyrie Irving was held to 5-of-15 from the field.

To the surprise of no one, the Heat are more than capable of slowing down James. After all, they had four consecutive years of practices with the guy and learned some of his tendencies and weaknesses along the way.

With the exception of Goran Dragic, both teams play at a slower pace. This plays into Miami’s hands, as they are capable of playing good team defense when motivated, combined with the ability of Wade to dominate games offensively in half-court sets.

Even outside of the X’s and O’s of how both teams match up, factor in the outside ramifications. Although this is not considered a rivalry (yet), the Cavs and the Heat have been locked at the hip due to the career of LeBron. After all, it was James who Cleveland for Miami in 2010, only to leave Miami to go back to Cleveland in 2014.

Due to the departure of one player, both the Cavaliers and the Heat’s championship aspirations changed immediately. Cleveland went from a below-average Eastern Conference team to the second-best team in the conference after just a year, while Miami went from four-time Eastern Conference champions to just battling for a playoff spot.

Of all of the possible first round playoff matchups for the Heat, Cleveland would present the ultimate motivation factor for a team still recovering after losing this generation’s best player through free agency.

After all, wouldn’t that be the perfect conclusion to an otherwise forgettable season for the Heat?
[xyz-ihs snippet=”Responsive-ImagenText”]