Heat vs. Spurs Game Recap: Heat Overpowered in Second Half 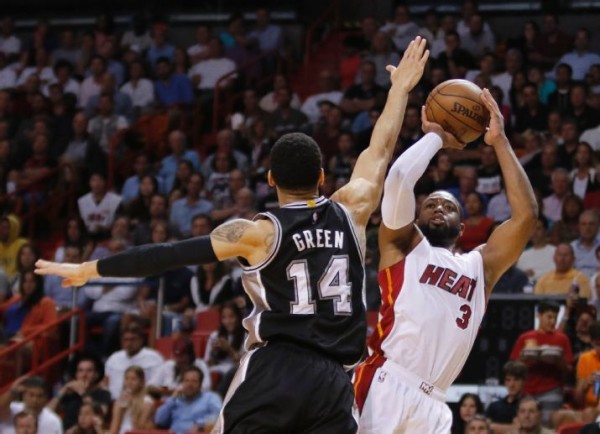 (Miami, FL) — Despite putting forth a gritty defensive effort, the Miami Heat (34-40) faltered on Tuesday night in the second half of their 95-81 defeat at the hands of the San Antonio Spurs (48-26) at American Airlines Arena.

Even though the Heat have now dropped both games against the Spurs this season by a slight double-digit margin, these games are great learning experiences for a banged-up and currently seventh-seeded Heat squad.

In his 1,000th career game played in the NBA, the four-time champion and six-time All-Star point guard Tony Parker scored 16 points to go along with his five assists on the night. San Antonio small forward and last year’s NBA Finals MVP Kawhi Leonard boasted an impressive line of statistics, as he led all scorers with 22 points in addtion to his nine rebounds, four steals, three assists and two blocked shots.

Despite only having played 24 minutes, legendary power forward Tim Duncan added yet another double-double to his extensive resume, as the five-time champion had 12 points, 11 rebounds and three blocks on Tuesday night.

“We’re coming down the stretch and we’re starting to feel good about ourselves,” said Duncan after his team’s victory over Miami.

For the Heat, Goran Dragic led the way in scoring with 19 points (six of 14 from the field and a perfect six of six from the free throw line) to go along with three assists. As a team, Miami only compiled a total of 11 assists on the night on 21 baskets made.

“(San Antonio) just took their game to another level that we couldn’t get to tonight,” said Heat head coach Erik Spoelstra in his postgame interview.

During an in-game interview, Spoelstra went beyond the game of basketball to give a heartfelt shoutout to TNT sideline reporter Craig Sager, who continues his battle with leukemia.

Dwyane Wade, who erupted on Sunday night for 40 points in Miami’s crucial 109-102 victory over the Detroit Pistons, struggled against the defending NBA champs on Tuesday night. While he finished with 15 points and five rebounds, the 11-time All-Star only managed to shoot six of 20 from the field.

Hassan Whiteside, who surprisingly returned early from his hand injury, scored in double figures en route to 10 points, six rebounds, two blocked shots and two steals in only 23 minutes of action. Mario Chalmers also had 10 points on the evening, which included a ridiculous buzzer beater (to the dismay of coach Popovich) that concluded the first half to pull the Heat within a 47-42 deficit of the Spurs.

Things do not get any easier for the Heat, as they will travel north to take on the Cleveland Cavaliers (48-27) on Thursday night at Quicken Loans Arena. The game, which is scheduled to tip off shortly after 8:00 pm ET, will be broadcast nationally on TNT.
[xyz-ihs snippet=”Responsive-ImagenText”]