Hassan Whiteside’s Temper a Cause for Concern 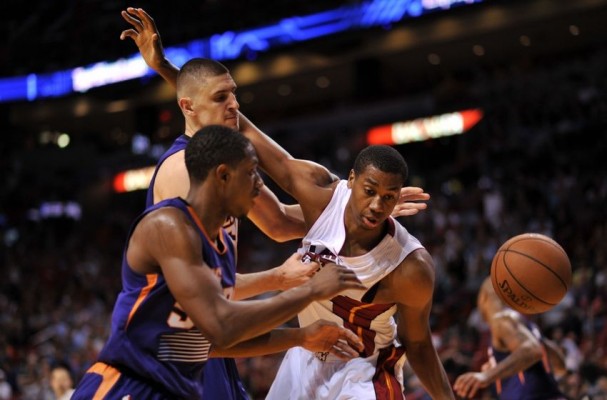 In what continues to be a feel-good story of the 2014-2015 season, there is no denying that Miami Heat (29-35) center Hassan Whiteside is the real deal with his production on the court. Ever since the first few days of the new year, the 7’0” Marshall University product taken in the second round of the 2010 NBA Draft, has solidified himself in the league as a hidden gem.

However, in just a span of seven days, Whiteside was ejected in consecutive Monday night games. Going forward, his self-composure absolutely must be labeled as a cause for concern.

Dwyane Wade, who almost single-handedly put the Heat in position to win during Miami’s 100-90 loss to the Boston Celtics on Monday night, was vocal regarding Whiteside’s behavior.

“Very (disappointed),” Wade said. “We all are. If you’re a Heat fan, you are. In this locker room, you are. Everybody. He’s going to have to learn. He’s been learning the hard way. Hopefully, he changes his mentality quick.”

Wade did not hold back his opinion on the matter, as the team leader had some more strong words for the young phenom about his temper issues, which suspended the 25-year old for Wednesday night’s matchup against the Brooklyn Nets.

Back on March 2nd, Whiteside engaged in an altercation with Phoenix Suns center Alex Len during the third quarter of the Miami’s 115-98 victory. Although Whiteside was fined $15,000 after her tried to tackle Len underneath the basket as an act of retaliation, he took responsibility for his actions in a post game interview.

“I shouldn’t have retaliated because it really hurt my team, but every day is a learning day for me so that’s what it was,” said Whiteside. “It was because I kept dunking on him (Len). I’m starting to realize a lot more teams are getting really physical with me and I’m down for it. That’s what I lift weights for.”

With these comments, Heat Nation expected more even-tempered behavior from Whiteside the rest of the season. However, just seven days later on March 9th, Whiteside went right back to his WWE Monday Night RAW style of problem-solving. This time, his target was Celtics center Kelly Olynyk, who Whiteside hit with a blindsided cheap shot.

After the game, Whiteside had already left the locker room before the media could speak with him about the incident.

Whiteside left before locker room opened. Heat says he will be available after practice tomorrow.

Joseph Goodman of the Miami Herald was correct indeed, as Whiteside was remorseful and spoke critically of himself to reporters after Tuesday afternoon’s shootaround.

“It was probably the worst 12 hours of my life. Just for the fact that we lost the game and I let what happened with my personal stuff on the court affect the team,” said a humbled Whiteside. “I even reached out to Kelly (Olynyk) and I apologized to him. He said he accepts my apology and he wished me much success in the future. I really felt bad about it. I felt like I let them (my team) down. It can’t happen again. We’re in the playoff hunt and it was just a terrible decision on my part.  I just want to apologize to everybody: the Heat fans, the coaches and the team.”

His behavior can ill-afford to hinder the Heat down the final stretch of the season, as Miami remains on the cusp of the eighth seed in the Eastern Conference. His importance to the team is extraordinary, as Whiteside has averaged 13.9 points, 12 rebounds and 2.9 blockers per game since the beginning of January.
[xyz-ihs snippet=”Responsive-ImagenText”]