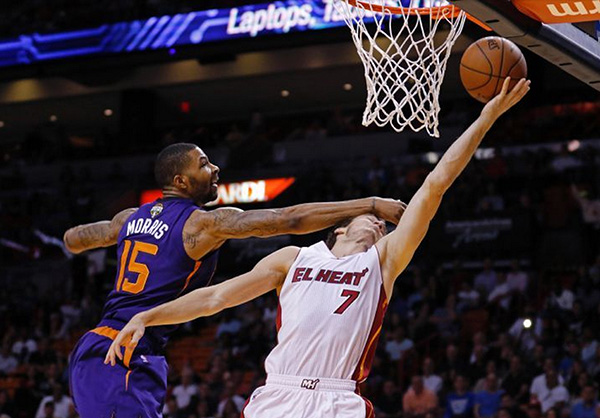 (Miami, FL) – In a huge game with playoff implications for both teams, the Miami Heat (26-33) pulled away from the Phoenix Suns (31-30) by a score of 115-98 in an action-packed contest on Monday night at American Airlines Arena. The victory was only Miami’s 11th home win of the season, but this one was just too sweet.

“We came in feeling this was an absolute must-win (game),” said Miami Heat head coach Erik Spoelstra after the game.

This high-energy affair featured a whopping six technical fouls, three player ejections and two flagrant fouls and it was the first NBA game all season in which three players were ejected in a single contest.

After the Heat went on a 39-point scoring tear in the second quarter to lead the Suns 62-48 at halftime, things started to heat up in the third quarter.

With Miami holding on to a 65-53 lead with 8:43 remaining in the third, Goran Dragic was clobbered by his former teammate, Suns power forward Markieff Morris, on a layup attempt. Rightfully so, Morris was given a flagrant two foul and was immediately ejected from the game.

Dragic played through foul trouble (he had five fouls called on him in his first 11 minutes of action) en route to 21 points (five of nine from the floor and a perfect nine of nine from the charity stripe) in only 15 minutes.

A little more than four minutes later, tensions hit a boiling point after a dunk by Hassan Whiteside with 4:27 remaining in the quarter. After he let go of the rim and inadvertently bumped into Suns center Alex Len, Whiteside was pushed aside by Len. The retaliation by the Suns center caused Whiteside to lose his cool, as he grabbed Len by the legs and tackled him to the floor.

Both players were quickly separated by teammates and referees, followed by technical fouls for fighting, which resulted in Whiteside and Len being tossed from the game. Whiteside, who recorded yet another double-double, finished his night with 17 points, 10 rebounds, two blocks and two two steals in only 26 minutes before he was kicked out. Len, who had a double-double as well, had 10 points and 11 rebounds in 27 minutes of playing time.

“I shouldn’t have retaliated because it really hurt my team, but every day is a learning day for me,” said Whiteside. “I’m starting to realize a lot more teams are getting physical with me and I’m down for it. That’s why I lift weights.”

Henry Walker, who was just signed to another 10-day contract, got in on the physical play less than a minute after Whiteside and Len were ejected. With 3:44 remaining in the third quarter, Walker whacked Markieff’s twin brother, power forward Marcus Morris, on a layup attempt and Walker was given a flagrant one foul.

With players from the Heat either in foul trouble or ejected from the game, guys like Tyler Johnson and Michael Beasley saw an increase in minutes and had to step up their play under coach Spoelstra.

That is just what Johnson and Beasley did, as both players rose to the occasion. Johnson, an undrafted rookie free agent out of Fresno State University, came off the bench to score a career-high 26 points out of nowhere, going 10 of 13 from the field (three of three from behind the arc) to go along with his four steals on the night.

Tyler Johnson: career-high 26 points for Heat (also more than he scored in any game in 4 yrs at Fresno State)

Beasley, who played for Phoenix during the 2012-2013 season, got revenge on his former team. The newest Heat signee excelled off the bench as he recorded 12 points and six rebounds. Dwyane Wade stepped up for the Heat as well to tally 16 points, nine assists, four rebounds and four steals.

For the Suns, small forward P.J. Tucker and shooting guard Eric Bledsoe both racked up 20 points, while Tucker had an impressive 14 rebounds. Former Milwaukee Bucks point guard Brandon Knight also put up solid numbers for Phoenix, as he notched 13 points and seven assists.

Up next on their schedule, the Heat will take on the Los Angeles Lakers (16-42) on Wednesday night at American Airlines Arena. The game will tip off shortly after 8:00 pm ET and will be broadcast nationally on ESPN.
[xyz-ihs snippet=”Responsive-ImagenText”]