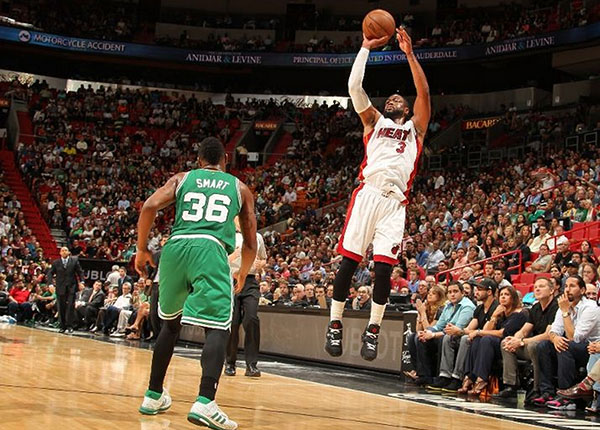 (Miami, FL) — The Miami Heat (28-35) lost to the Boston Celtics (26-36), 100-90, at American Airlines Arena Monday night in a game featuring two teams vying for one of the final two playoff spots in the East. The Heat were 2-0 versus the Celtics coming into the contest, and despite the loss, Miami remains 1.5 games ahead of Boston in the Eastern Conference standings.

Still, it was a costly loss for the Heat, who missed an opportunity to gain ground on the two teams they are chasing: the seventh-place Charlotte Hornets (28-33), who lost to the Washington Wizards earlier in the evening, and the eighth-place Indiana Pacers (28-34), who were idle on Monday.

While it was not a blowout, the Celtics maintained a small but consistent lead throughout most of the game and outscored the Heat in every quarter except the second. The Heat managed to pull ahead of Boston, 57-54, with 5:22 remaining in the third quarter, but they were outscored 19-7 by the Celtics the rest of the way and trailed by nine points heading into the fourth.

The Heat, led by Dwyane Wade‘s 34 points on 13-of-23 shooting, made a run in the final quarter to pull to within three points, but would get no closer. Wade also had four rebounds and two assists on the night.

Luol Deng, who missed the Heat’s previous two games with a thigh injury, returned to the team’s starting lineup and scored 11 points to go along with four rebounds, four assists and one steal.

The depleted Heat bench was led by forward Michael Beasley, who scored 14 points in 32 minutes. Miami forward Udonis Haslem was unavailable due to wrist and knee injuries.

Point guard Goran Dragic missed his second straight game with a back injury suffered in the Heat’s loss to the Washington Wizards over the weekend. Mario Chalmers, who replaced Dragic in the starting lineup, was solid in 34 minutes of play, notching 12 points, four assists and two steals.

Hassan Whiteside had a short night with seven points and nine rebounds. The Heat’s starting center was ejected from the game late in the third quarter after being called for a flagrant-two foul against the Celtics’ Kelly Olynyk. It was Whiteside’s second ejection this season.

Dwyane Wade alluded to Whiteside’s temper before the game:

A frustrated coach Erik Spoelstra told reporters after the game that Whiteside’s anger management issues on the court will be addressed: “We’ll handle it and it’ll be corrected. Everybody’s responsible to the team.”

The Heat’s talented young center has emerged as one of the league’s most improved players this season, but Whiteside’s inability to manage his emotions is becoming a frustrating storyline for the team.

After the game, Wade told reporters that he is “very (disappointed)” in Whiteside, adding: “If you’re a Heat fan, you are. In this locker room, you are. Everybody. He’s going to have to learn…hopefully he (will) change his mentality quickly.”

Whiteside was not the only Heat player ejected from the game; shooting guard Henry Walker was tossed with less than a minute left in the fourth quarter when he and Celtics guard Evan Turner were called for a double foul. Turner was also ejected.

The Celtics were led by point guard Isaiah Thomas who scored 25 points off the bench. Starting center Brandon Bass had a good all-around game with 13 points, nine rebounds, four assists and three steals.

The Heat will next play the Brooklyn Nets Wednesday night at American Airlines Arena in another game full of playoff implications.

The game tips off at 7:30 pm EST and will be broadcast on Sun Sports.
[xyz-ihs snippet=”Responsive-ImagenText”]