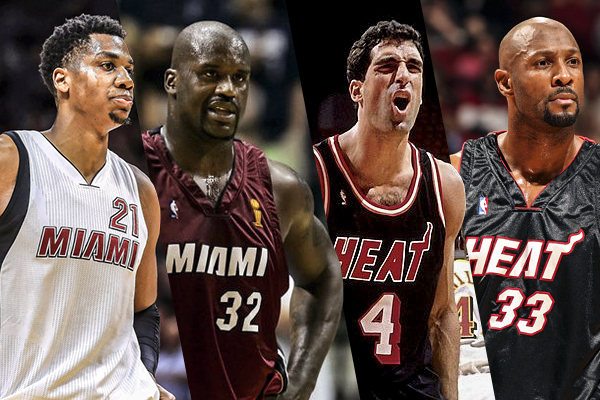 In the relatively short history of the Miami Heat, only in existence since 1988, the franchise has had some top-end centers. Team president Pat Riley, who has a long history of showing his apparent preference for big, defensive-minded big men, has previously coached Kareem Abdul-Jabbar and Patrick Ewing.

After signing the mercurial 7-footer Hassan Whiteside, a former journeyman and second-round pick from Marshall University, to a four-year, $98 million contract, Riley once again believes he has a center who can patrol the paint for years to come.

While his offense is still a work in progress, Whiteside has been an absolute monster defensively and on the boards. After garnering a big contract, he has done everything to justify Riley’s faith in just 32.6 minutes per game, averaging 17.0 points (career-high), a league-leading 14.1 rebounds (career-high), and 2.1 blocks per game last season.

He was also fourth in both defensive win shares (5.3) and defensive rating (99.9). He’s got four career triple-doubles (points, rebounds, and blocks). It must be recalled that in previous eras, you would throw away a whole team and picks for a player of Whiteside’s mold.

Unless the Gastonia, North Carolina native finds himself injured, he’s likely to continue offensive improvement of his game, which would make him elite. He will likely turn into an All-Star this season, given the fan vote has been stripped down to 50 percent, with current players (25 percent) and media (25 percent) adding significant input. At 28 years old, these next few seasons will be his prime years.

On this note, let’s see how he stacks up against the greatest centers in Heat history.

Drafted as the ninth pick of the 1988 draft class, the Lebanese-American Seikaly became the first-ever pick for the Heat. An All-Big East player at Syracuse University, he led the Orangemen to the national championship game in 1988 and finished as their all-time leading rebounder.

By his second season, and next four after, Seikaly was a consistent double-double machine, averaging 15.4 points and 10.4 rebounds during his six seasons. As reliable as he was, Seikaly was never an All-Star or All-NBA player, though this is probably more about how stacked Eastern Conference frontcourts were during his best years.

He was never going to beat out even an older Robert Parish, early ’90s era Ewing, or a certain, massive player coming later in the list — all Hall of Famers. However, was he, at his best, better than Whiteside? That’s a thoughtful “no.”

Seikaly had a better mid-range game, some ridiculous low-post moves, and was a decent free-throw shooter, up to 73.5 percent during the 1992-93 season, better than any for Whiteside.

You’re not losing too much with Whiteside offensively. He’s also been a much better rebounder and defender at this stage, where Seikaly was already in decline at age 28. Seikaly was athletic, but Whiteside is out here snatching shots out of the bluest skies, similar to Wilt Chamberlain or Bill Russell in their heyday.

Look, it’s not hard to tell that Zo was better, right? We can readily agree on that.

Truthfully an undersized center in his era, clocking in lesser than his billed 6-foot-10 stature, Mourning was Ford-tough, and played with a sharp competitive edge. He could be a bull in a china shop or nail his functional mid-range jumper. Zo looked like he was machined directly out of iron ore. Moreover, he was low-key clutch, and he punched kidney disease in the face.

He was a dominant defensive player at Georgetown University — which carried over into the NBA. After he was traded from the Charlotte Hornets to the Heat, essentially for sharpshooter Glen Rice, Mourning became a five-time All-Star, two-time Defensive Player of the Year, and won a title in his time in Miami. Aside from Dwyane Wade, he’s been the most recognizable Heat player and cornerstone.

But how much better was he, relative to surrounding talent while he was starring in Miami?

Mourning played with Tim Hardaway, Dan Majerle, Jamal Mashburn, and a host of other playoff proven starters and role players — very few of which the current Heat have around Whiteside. He’s played with no one within hailing distance of Hardaway at the point, or with a collective unit like Zo’s 1996-97 team that went 61-21.

Also, let’s get into it: Would Alonzo Mourning be Alonzo Mourning in today’s more nuanced and skilled league? Today, Zo’s mid-range game — that running short hook they apparently taught all Georgetown centers through Roy Hibbert’s tenure — wouldn’t necessarily take a team to a title. (Though his high free-throw attempts, especially during the mid-to-late ’90s, would make advanced stats guys happy.)

Defense and rebounding transfer over into any era, but it’s hard to know if you have him in lineups against today’s small-ball lineups, with nuanced cuts, drags, and heavy switching. Merely moving laterally against today’s lengthier, more explosive bigs and playing in space would likely prove problematic for Mourning.

Whiteside will never be who the Diesel was in his Los Angeles Lakers’ leading prime, or even upon entry into the league as the No. 1 overall pick in 1992 to the Orlando Magic — one pick ahead of Mourning. The most physically dominating player in league history, O’Neal was one of the greatest 10-15 players of all-time. At one point, the behemoth was the modern day Wilt Chamberlain, virtually unstoppable when at top physical condition.

He was probably even a better player than Whiteside as a 19-year-old at Louisiana State University.

However, for this exercise, we’re using the Heat version, the 33-year-old iteration that averaged 19.6 points and 9.1 rebounds per game, plus a paltry 46 percent from the charity stripe — terrible even for O’Neal.

Even at this stage, O’Neal was a much more dependable offensive player on the low block, consistently demanding double teams, and capable of finding open shooters out of them. Though a terrible free-throw shooter, his ability to draw fouls and get to the line surpass Whiteside’s current output.

Defensively, Whiteside gets a slight edge, via his athleticism and youth. O’Neal could be susceptible to getting beaten on screens that Whiteside can mitigate against — should Whiteside choose to give consistent effort, which can be a definite issue at times, in all phases of his game.

During O’Neal’s best season with Miami, the team’s best interior defender was actually — you guessed it — Alonzo Mourning, who averaged 2.7 blocks a game, off the bench.

All this said O’Neal was still a better player than Whiteside is now — way too much championship experience and offensive firepower. This is relative, of course; Diesel was primarily a high-percentage inside bruiser in ways Whiteside will never be.

In fact, regarding box score plus-minus (measuring per 100 possessions what a player contributed against a replacement-level player), Whiteside was -0.5, mainly because of his lackluster offense contribution.

Ultimately, if Whiteside hopes to ascend up the list of the Heat’s greatest centers, he must improve his efficiency by settling into his sweet spots more often, and get to the line.
[xyz-ihs snippet=”HN-300×250-TextnImage”]