Can the Heat Make a Serious Playoff Push Without Chris Bosh? 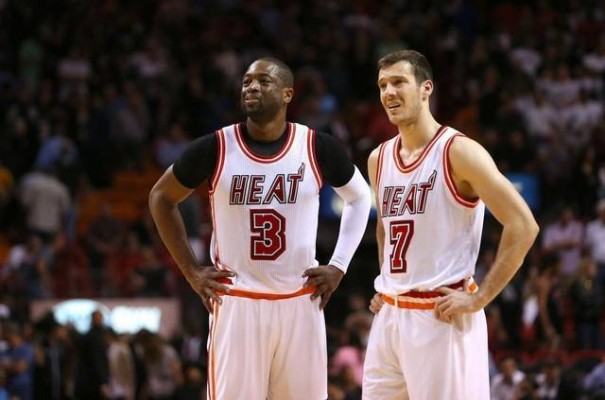 Chris Bosh is a soldier — plain and simple.

He’s a fighter and a true competitor in every sense imaginable, but right now he’s dealing with a different kind of fight. For the second season in a row, Bosh is dealing with blood clots that may force him to sit out the remainder of the season.

Though early reports suggest the issue may not be as serious as the last time around, he is still being required to take blood thinners in order to remove the clot that has shown up in his calf. As a result, he will likely miss extended time, as doctors strongly advise a cease in physical activity while taking them.

While teammate Dwyane Wade and others around the 13-year veteran have suggested that Bosh may return at some point this season, reports have recently come out that the Miami Heat organization is urging Bosh to sit out the rest of the season. If that is the case, just how far can the Heat go without him?

Upon entering Wednesday night’s matchup with the Golden State Warriors, the Heat had won nine of their previous 12 and were riding a three-game win streak since Bosh had been out. They nearly beat the best team in the league (and possibly the best team of all time) Wednesday night, coming ever so close to their second four-game win streak of the season. This one, though, would have been entirely without the help of Bosh.

Though the sample size is small, the Heat seem to be finding ways to produce without their starting power forward and highest paid player. Luol Deng has been hot while filling in for Bosh at power forward, averaging 21.5 PPG over his last four games. Hassan Whiteside is doing Hassan Whiteside things. Guys like Justise Winlsow and Josh McRoberts have stepped up as well, and the Heat actually seem to be establishing a nice flow offensively.

The role of scoring has been efficiently spread out amongst the team. Right now it’s a slew of guards and undersized forwards running the floor, anchored by Whiteside down low. The emphasis on small ball lineups with quick, slashing guard play led by Goran Dragic seem to be working wonders for the Heat in the absence of Bosh. However, the Heat were recently dealt another blow, as guard Beno Udrih is now out for the season due a foot injury.

Miami is currently looking at a roster with only 11 active players, who are as follows:

That’s it. That the entirety of the Heat’s active roster right now and that’s likely all it will be for some time to come.

While the Heat currently rank fourth in the Eastern Conference standings, it will be hard for them to make an extended playoff push without the veteran leadership and experience that Bosh would bring to the table. Bosh’s scoring, rebounding and floor-spacing have been keys to the Heat’s success in the past, but perhaps what they will miss most without him, come playoff time, are his incalculable intangibles.

Some experts predict that the Heat may be due for a shot at the Eastern Conference Finals this year, but without Bosh, it will be hard to make it out of the second round. The Heat, however, are a team of fighters, who tend to play better with their backs against the wall. Only time will tell how far these guys can go without their leading big man. Erik Spoelstra will likely have to go back to the drawing board, tinker with lineups and demand more out of the remaining squad.

Until we know more about the circumstances surrounding Bosh’s situation, Miami has no choice but to assume he’s not coming back. For the time being, the Heat will have to lock in on the defensive end, and play true team basketball on offense in order to make up for Bosh’s absence. Whiteside will have to pick up the slack when it comes to the “big man” duties and Stoudemire will have to continue to fine tune his offensive efforts. Take all of that, throw in a dash of vintage D. Wade magic, and it may just be enough to make a serious playoff run.
[xyz-ihs snippet=”Responsive-Ad”]