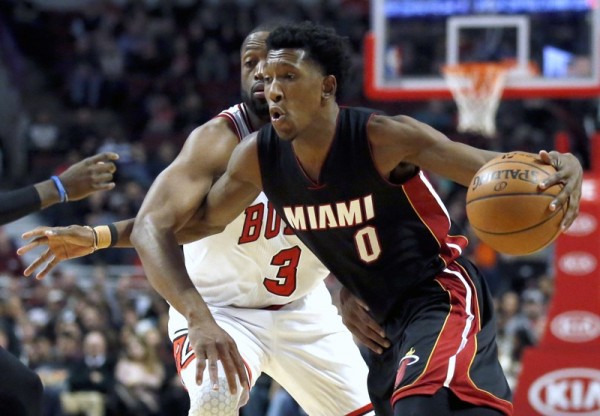 The Heat played the Bulls close the entire night, but still trailed for most of the game. After tying it up at 55-55 heading into the half, Wade came out hot in the third quarter to extend the lead to 13. The Heat fought and clawed their way back though, and midway through the fourth quarter, Tyler Johnson nailed a corner three to pull his team to within one, at 97-96.

Then Jimmy Butler exerted his will by earning back-to-back trips to the free-throw line. From there, the Heat had trouble closing the gap until the final 10 seconds when Hassan Whiteside floated in a three-footer to make it a one-point game again, this time with the score being 101-100.

On the final possession, Josh McRoberts inbounded the ball to Goran Dragic, who then botched a dribble handoff to Josh Richardson, which resulted in a steal by Butler and a Bulls win.

“The handoff was mishandled, it’s nobody’s fault,” Heat head coach Erik Spoelstra told reporters after the game. “It’s just tough to see it come down to that. We had opportunities in the fourth quarter, better opportunities to try to take the lead.”

Aside from sealing the game late with a couple clutch free-throws, Butler stuffed the stat sheet in this one. He scored 31 points, grabbed seven rebounds and dished out five assists. Wade also added 28 points against his former team, who he made sure to praise after the game.

“That team over there, they’re scrappy,” Wade said of the new-look Heat squad.

Dragic led all Heat scorers Saturday night with 21 points and 11 assists. Miami also got a quality performance out of Whiteside in this one. After struggling in his last couple outings, the 7-footer scored 20 points, notched eight rebounds and tallied three blocks. Ultimately though, the two Heat leaders couldn’t do enough to overcome the missed opportunities and a couple crucial turnovers late.

“There were a few key possessions that we wish we could have back, but you know, sometimes it doesn’t go that way,” Whiteside explained after the loss.

Though the Heat have struggled to find ways to win this season, they will look to take advantage of an extended homestand over the next couple of weeks. After playing four games in just five days this week, with the last three being away games, the Heat are surely looking forward to playing the next six at home in Miami.

“We gotta protect home court,” Whiteside said of the looming homestand. “We really built a toughness on the road, but in these six games, I really feel like we can make an improvement.”

The Heat will begin the homestand when they host the Washington Wizards on Monday. As for the Bulls, they will play their third straight home game on Tuesday versus the Minnesota Timberwolves.
[xyz-ihs snippet=”Responsive-ImagenText”]