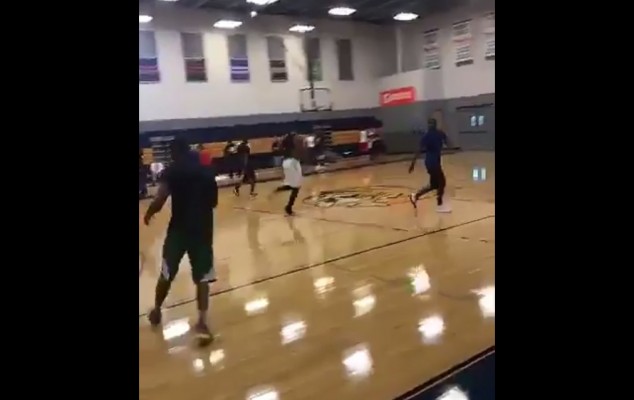 Ever since disgruntled All-Star Kyrie Irving requested a trade from the Cleveland Cavaliers, rumors have begun to fly that he may become the newest member of the Miami Heat. While the most up-to-date reports point to Irving ending up elsewhere, a recent video is giving those in favor of a potential trade a lot of hope.

On Friday, Heat star Hassan Whiteside took to Snapchat to post a series of videos showing him and Irving playing on the same team during an offseason pickup game. With Irving’s incredible skill when driving to the basket and Whiteside’s ability to grab rebounds and finish inside, the two were looking like a powerful offensive duo.

NBA stars are known to play together during the offseason to keep their skills sharp during the summer months, but could it be that Whiteside and Irving are getting familiar with each other’s playing style in case a trade between the Cavs and the Heat ends up taking place? One thing is certain, it sure is fun to watch these two dominate the court together, only time will tell if they will be donning the same jersey come next season.
[xyz-ihs snippet=”HN-Native-EndofArticle”]