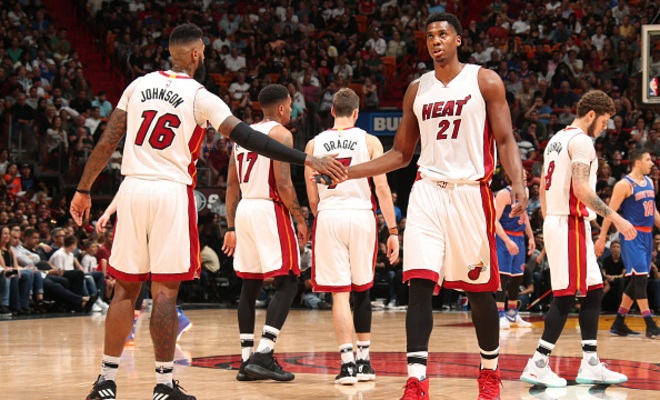 The Miami Heat have slowly but surely snuck themselves into the conversation of top teams in the Eastern Conference.

After struggling to maintain a .500 record through the first two months of the season, the Heat finished 2017 strong, winning six of their last nine games of the year, and have yet to lose in 2018.

That kind of success has begun to turn heads, including that of former NBA All-Star and current ESPN analyst Tracy McGrady.

McGrady joined ESPN’s “The Jump” on Friday morning to discuss how Miami has impressed him so far this season.

“I feel good about them because they’re well coached,” McGrady began. “When you look at a team that doesn’t have any All-Stars and any type of superstars, and they’re fourth in the Eastern Conference, that shows you how great of a coach Erik Spoelstra is.”

He continued to say that for Miami to reach loftier goals than just a spot in the playoffs, it is going to have to add talent to its roster.

“In order for them to compete against teams like Boston Celtics and the Cavaliers. Yes, to prepare them to that next level they’re going to need an All-Star,” he said. “I like the scrappiness out of this team, but to advance in the playoffs they’re going to have to get somebody that can take the load off of these guys when it gets tough.”

The Heat have a plethora of pieces that could be part of a trade to bring a true star to Miami, but those players are also responsible for the team’s recent success.

It’s hard to predict what will actually take place in Miami between now and the Feb. 8 NBA trade deadline. One thing is certain, however, if the Heat roster continues to perform like they have in recent games, it should have many more wins by the time the deadline arrives.
[xyz-ihs snippet=”HN-300×250-TextnImage”]