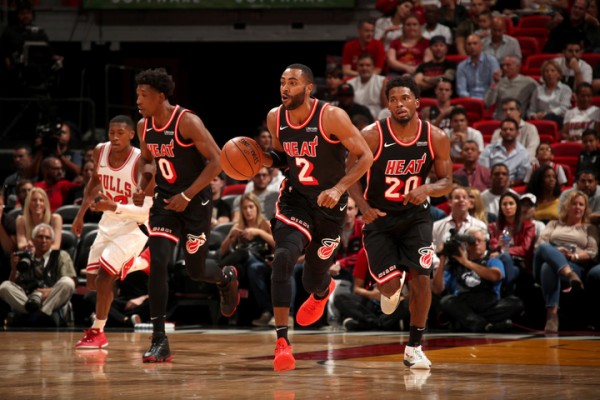 The Miami Heat have surged to a 23-17 record thanks to a five-game winning streak and improved play across the roster. That doesn’t mean they aren’t looking to make moves, however.

According to ESPN’s Zach Lowe, the Heat are certainly going to explore any and all moves as the Feb. 8 NBA trade deadline approaches. Not only because the lack of a traditional star may hold an already strong roster back come playoff time, but also because they are looking for an opportunity to dump some of the expensive contracts already on their roster.

“But even some around the team consider that scenario optimistic. They know they face major questions about their ceiling,” Lowe wrote. “Expect Miami to be active in trying to address them as next month’s trade deadline approaches. They are projecting optimism that they could move those pricey new contracts, according to sources around the league. Rivals are skeptical.”

Lowe continued to explain that while Wayne Ellington may be on the trade block simply because Miami doesn’t know if it will be able to re-sign him this offseason, he is not its most likely trade bait.

“Together, (Justise) Winslow and (Hassan) Whiteside form Miami’s best realistic trade package — their only means of a huge talent upgrade,” he wrote. “(The Heat have shown zero interest in moving Dragic, per league sources.) The Heat could dangle them for a star center on an expiring contract — DeAndre Jordan or DeMarcus Cousins. Miami has an appetite for that kind of gamble; they feel they can sell any willing rental on Heat culture — plus tax benefits and weather. The word ‘willing’ is key there. Miami’s ultra-physical, workaholic culture isn’t for everyone; there at a least a few players in the league who would hesitate to sign there if they had an equal offer elsewhere, per league sources.”

It seems like a promising enough venture, but Lowe added that even if Miami were to offload those two contracts, it still wouldn’t open much meaningful cap until after 2020. He also explained why dealing Whiteside before Miami knows his true potential comes with risks as well.

“Selling low on Whiteside and Winslow isn’t risk-free, either. A healthy, engaged Whiteside raises Miami’s ceiling,” he wrote. “He is their only source of offensive rebounds, precious extra chances for an unsteady offense, and their best rim protector. Whiteside can’t switch or hound ace shooters 30 feet from the rim, but when he’s on, he can defend two players at once on pick-and-rolls that encroach upon the paint.”

Increased talk of trades surrounding the team could serve as a distraction for a roster that is hitting a promising stride. Luckily, it seems the players are only focused on one thing: winning on the court.

“The Heat aren’t thinking about any of that,” Lowe wrote. “The players believe they are close to Jungle form — that they can go 30-11 again, and push anyone in the East.”

It would be bittersweet to say goodbye to any member of a Heat team that is playing so well at the moment. Success is fleeting, however, and the best programs always look to the future. Hopefully the front office can both bring a star to Miami and dump some of the high-priced contracts that could plague them in the future.
[xyz-ihs snippet=”HN-300×250-TextnImage”]