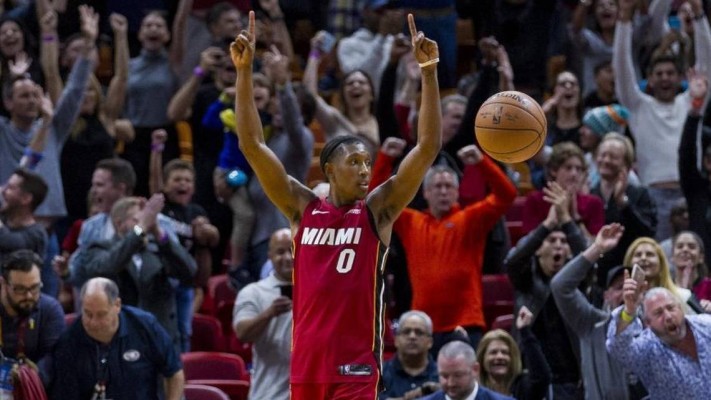 The Miami Heat have recently been enjoying a level of success that fans haven’t seen for quite some time. They are looking to extend a current a four-game winning streak and have won 11 of the 15 games they have played in over the last month.

According to Barry Jackson of the Miami Herald, much of Miami’s success can be attributed to its ability to win close games. In other words, the 2017-18 Heat are playing like one of the most clutch teams in the NBA.

“For statistical purposes, the NBA defines clutch as the final five minutes of games with a margin of five points or fewer,” he wrote. “The Heat is now 16-7 in games that fit that description, a 69.6 winning percentage that ranks fourth best in the league behind Boston, Golden State and San Antonio.

“Only the Celtics have more clutch wins (20) than the Heat.”

As Jackson explained, the success is due to the performances of almost every rotational player on the roster. While there is no traditional star on the team, forward James Johnson isn’t worried about a lack of players ready to take a potentially game-winning shot.

“They’d be a fool to think that,” Johnson said of those who say Miami has no closer. “We’ve got a couple on this team.”

Point guard Goran Dragic echoed Johnson’s sentiment, saying that Miami has “a lot of guys” who are ready to take late-game shots.

The numbers seem to reflect Johnson and Dragic’s assertions.

“What’s more, Miami has outscored opponents by 50 points in 80 clutch minutes,” Jackson wrote. “Only Cleveland has a better plus-minus in the clutch (plus-54 in 86 minutes).

“And consider this: The Heat is shooting 44.4 percent on clutch threes (20 for 45), which is best in the league. Miami’s 52.4 percent shooting from the field in the clutch is second best, behind only Boston’s 54.2 percent.”

The Heat don’t have anyone considered to be a bonafide star on the roster right now, but small forward Josh Richardson may not be too far off. He is one of the many reasons the Heat have found success late in recent games.  Per Jackson, he is 11-of-19 from the field in clutch minutes, 5-of-9 from the three-point line, and 15-of-17 from the free-throw line. Those numbers rank among the league’s top forwards in all three categories. Rather than focusing on personal heroics, however, Richardson is more concerned with team success.

“I think we’re growing up, learning how to play together,” Richardson said. “Being able to come together like this and show so much grit is big for us. A lot of teams aren’t getting this type of experience this early.”

The Heat proved that they could win in bunches during the second half of the 2016-17 season when they went 30-11 to finish the season. While they failed to replicate that kind of success early this season, they have managed to get back on track and currently sit at fifth in the Eastern Conference standings.

For Heat head coach Erik Spoelstra, the success his team has enjoyed is based on the intangibles his players possess:

“You have to deal with some things that aren’t going your way and again show that resiliency just to find a way.”

Heading into the final stretch of the first half of the season, it is clear that the Heat have discovered what it takes to win. If they can continue a similar kind of success as the 2017-18 campaign progresses, there is no doubt that they will be finding their way to the NBA playoffs.
[xyz-ihs snippet=”Responsive-ImagenText”]