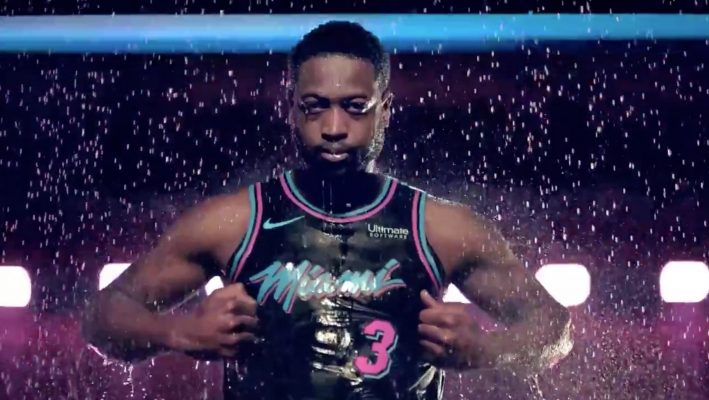 The Miami Heat have officially put the league on notice with the release of their “Vice Night” jerseys.

In addition to the fancy attire and elaborate court design, the team has released a player introduction video. Franchise legend Dwyane Wade shared the clip, along with his take on the theme:

Here it is #HEATNation – the official intro video for #ViceNights. I’m excited to be wearing this jersey during my #OneLastDance with the @MiamiHEAT. You can get your own #ViceNights jersey tonight at midnight at @AAarena or online. pic.twitter.com/4jQYM9zIVi

Wade, 36, is indeed thrilled to wear the jersey. The veteran, who is in the final year of his prolific career, will get a chance to sport the popular uniform this season. Although Wade is already known for his attire off the court, the guard will get an opportunity to bring some of his fashion on the court as well.

In nine games, Wade is averaging 14.3 points, 4.0 rebounds and 2.9 assists per game this season. While the former NBA Finals MVP isn’t putting up the elite numbers he once did, fans are enjoying their last moments with the franchise icon.

Everyone will get a chance to the see the “Vice Nights” court and video on Friday night when the Heat take on the Indiana Pacers.
[xyz-ihs snippet=”HN-300×250-TextnImage”]