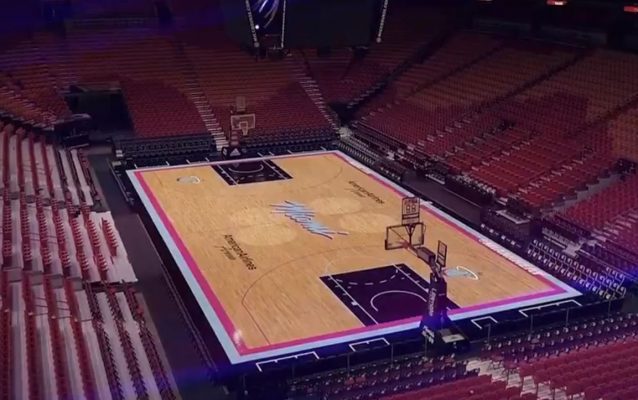 The Miami Heat have officially unveiled their “Vice Nights” court.

You didn't think it would be THIS good ?

Be amongst the first to see our new #ViceNights hardwood AND take a photo with it, right here inside @AAarena Thursday night at midnight! https://t.co/8ktA13fdj8 pic.twitter.com/C9qJaitS9S

The debut comes in conjunction with the team releasing its “Vice Nights” jerseys yesterday. The jerseys are expected to be available for purchase on Thursday at midnight, while fans will have the opportunity to see the brand new court at the same time at American Airlines Arena.

Nike introduced the concept of “City Edition” jerseys last season, and the Heat’s white Vice jerseys were such a success, that they sold more City Edition jerseys than all 29 other teams combined.

Heat fans will get a chance to see their team take the court on the new “Vice Nights” court as the team hosts the Indiana Pacers on Friday night at 5 pm ET.
[xyz-ihs snippet=”HN-300×250-TextnImage”]