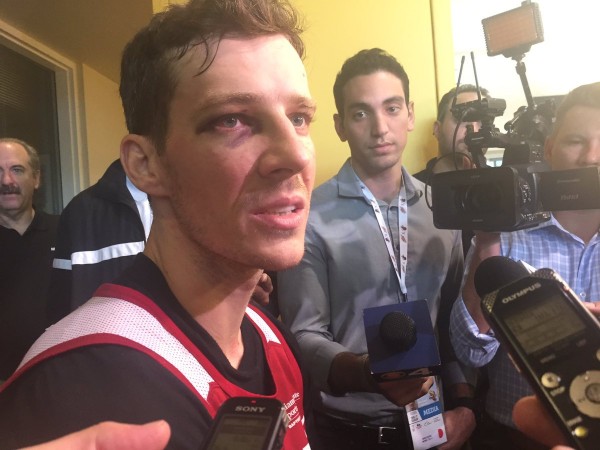 Only a few players in the league are as tough as Miami Heat point guard Goran Dragic.

After sitting out of the teams’s 102-98 loss to the Indiana Pacers on Sunday with a severely swollen eye, the 30-year-old guard is ready to get back on the court and play Wednesday against the New Orleans Pelicans:

Dragic was unintentionally elbowed by opposing gaurd Cory Joesph in Saturday’s win against the Toronto Raptors. Despite traveling with the Heat to Indiana, the guard was declared out after his eye completely swelled shut Sunday morning.

This is why Goran Dragic cannot play tonight:; pic.twitter.com/4QTAxGLF2d

In spite of all the injury troubles Dragic has faced this year, the veteran has victoriously risen above it all. In his third season with the Heat, the 6-foot-3 guard is averaging 20.1 points and 6.0 assists on a career-high 42 percent shooting from three-point land.

The team will be more than happy to get their main man back as the race to the playoffs intensifies in the last stretch of the regular season.

The Heat will continue that race Wednesday as they face Anthony Davis and DeMarcus Cousins’ Pelicans at 7:30 p.m ET at American Airlines Arena.
[xyz-ihs snippet=”Responsive-ImagenText”]