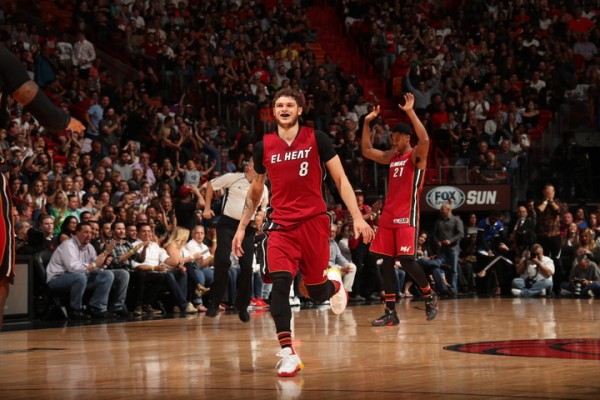 (Miami, FL) – In what continues to be a Cinderella season, the Miami Heat (32-34) shut down the Toronto Raptors (38-28) on Saturday night en route to a dominant 104-89 victory at American Airlines Arena.

The Heat, who had started the season with a dismal 11-30 record well into mid-January, won their fourth straight game and obtained their 21st victory in the last 25 games.

“We’ve made up a lot of ground,” Heat coach Erik Spoelstra said during his postgame press conference. “Things will take care of itself if we handle our business.”

Miami shooting guard Dion Waiters led all scorers on the night with 20 points (6-of-10 from the field and 4-of-6 from three-point range) to go along with five assists, while shooting guard Tyler Johnson came off the bench for 16 points, three assists and three rebounds.

Dragic, who played only 41 seconds in the second half, left the game and did not return after he took an elbow to the right eye from Raptors point guard Cory Joseph.

“It’s a bruise in his eye. We’ll find out more and how he feels tomorrow as far as the swelling goes,” coach Spoelstra said of Dragic’s injury. “The plan is right now to travel him and we’ll see. We’ll be smart about it.”

The Heat defense frustrated Raptors All-Star shooting guard DeMar DeRozan (27.4 points per game this season) for most of the night, limiting him to just 17 points on 5-of-16 shots from the field.

“We wanted it. We knew it was going to be a tough game,” Waiters said. “Knowing they just came off a back-to-back, I think they did a tremendous job coming out with a lot of energy in the first half. Just playing together and making the right plays.”

In addition, Miami held Toronto to an NBA season-low seven assists on 33 field goals made on the evening. The Raptors trailed the Heat by as many as 25 points, but were able to get to within 11 points in the fourth quarter after they went on a 12-0 run.

For Toronto, center Jonas Valanciunas had a double-double with 10 points and 10 boards, while shooting guard Norman Powell and reserve point guard Delon Wright had 14 and 13 points, respectively.

Up next, the Heat will hit the road to play the Indiana Pacers (33-32) on Sunday night at Bankers Life Fieldhouse. The contest, which is scheduled to tip off shortly after 6:00 p.m. ET, will be broadcast live locally on Fox Sports Sun and nationally on NBA TV.
[xyz-ihs snippet=”Responsive-ImagenText”]