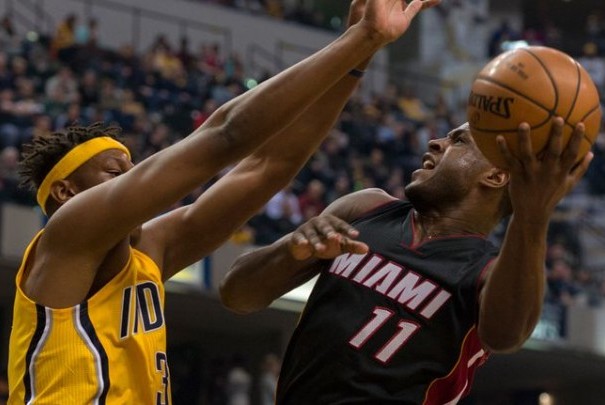 (Indianapolis, IN) – Despite an impressive comeback attempt on the road, the Miami Heat (32-35) were unable to make their shots late in a 102-98 loss to the Indiana Pacers (34-32) on Sunday night at Bankers Life Fieldhouse.

The clutch play of Pacers four-time All-Star forward Paul George was too much to overcome for the Heat, as he went off for a game-high 28 points (9-of-19 from the field and a perfect 9-of-9 from the free-throw line) and 10 rebounds.

“This was very big. We’ve had a tendency to pick up a game and lose a game, and that trend is really hurting us right now,” George said after the game. “This part of the season is where we really need to start playing our best basketball. We’ve been inconsistent, and this was a must-win. (Goran) Dragic not playing tonight made them an easier opponent. Not an easy opponent, but it just made it a better matchup for us and we were able to take advantage of it.”

Miami had to play without star point guard Goran Dragic, who had his right eye swollen shut from an elbow to the face during Saturday’s 104-89 victory over the Toronto Raptors. Dragic’s services were clearly missed by his teammates and coaching staff, as Miami fell to 1-8 on the season when he is out of the lineup.

The Heat, who trailed by 11 points with 3:55 remaining in the third quarter, managed to come back and take the lead late in the final frame. Following a 3-pointer banked off the glass by power forward James Johnson, shooting guard Wayne Ellington hit a clutch trey with just over four minutes left in regulation to give the Heat a 94-93 lead.

However, the lead did not last very long as Indiana outscored Miami 9-4 the rest of the way to pull off the victory at home.

“Once we got up by one, they made more plays down the stretch. Simple as that,” Heat head coach Erik Spoelstra said following the loss. “We came right back, but Paul George does what great players do.”

Ellington and Johnson had 19 and 14 points off the bench, respectively, but the Heat struggled from behind the arc and only shot a combined 9-of-32 from that range.

Star center Hassan Whiteside led the Heat in a monstrous performance with 26 points (11-of-21 from the field), a whopping 21 rebounds and one block.

“Guys was still playing hard. It would be easy to come in here and make excuses, but these guys don’t care. Don’t care that we got in at 4:00 a.m. last night, none of that. Guys came in here and played hard. I love these guys,” Whiteside said of his team’s effort against Indiana.

Shooting guard Dion Waiters, who continues to be one of the NBA’s most improved players this season, scored 20 points for the second game in a row while adding eight boards and six assists.

“It was tough, but at the end of the day, I’m not making no excuses,” Waiters said. “We was right there and we could’ve made a play or two. Could’ve won the game. As long as we put ourselves in a position where we fall back, and that’s what it’s about.”

For the Pacers, center Myles Turner had 15 points and eight rebounds in 30 minutes of action, while power forward Thaddeus Young and point guard Jeff Teague had 13 and 12 points on the night, respectively.

Up next, the Heat will begin a five-game homestand on Wednesday night when they host the New Orleans Pelicans (26-40) at American Airlines Arena. The contest, which is scheduled to tip off shortly after 7:30 p.m. ET, will be broadcast live locally on Fox Sports Sun.
[xyz-ihs snippet=”Responsive-ImagenText”]