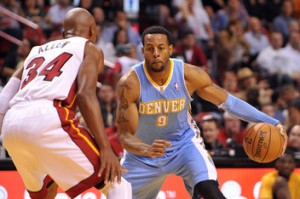 US Presswire, "But with the team’s new ‘position-less’ approach, the Heat have sacrificed interior size for increased offensive versatility, so when the team’s defensive intensity takes a dip, shootouts like Saturday’s may become the norm."

Coming into the season, much of the talk about the composition of the Miami Heat’s roster after the acquisitions of free agents sharpshooters Ray Allen and Rashard Lewis centered on just how devastating the Heat offense could be.

Already one of the top offenses in the league for the past two seasons – Miami was third in the NBA in points per 100 possessions in the 2010-11 season, and sixth last year – adding two of the league’s all-time best 3-point shooters to put around the Heat’s “Big Three” of LeBron James, Dwyane Wade, and Chris Bosh could make for a near-unguardable attack.

Through three games, it appears that could be the case.

The Heat torched a Boston defense that was second in the league last year for 120 points in the opener, and after a sloppy, turnover-ridden performance against the New York Knicks, came back home and lit up the Denver Nuggets for 119 points Saturday.

Through three games, Miami is leading the NBA in scoring and field goal percentage, and is fourth in 3-point percentage.

Both Allen and Lewis have appeared to be perfect signings to compliment the Heat’s core, perhaps even surpassing expectations so far.

The two are combining for 25 points per game off the bench, with each shooting 62.5 percent from the field, while Allen is hitting 56.3 percent of his long-range attempts, and Lewis 62.5 percent.

Allen’s 4-point play on a corner triple off of a feed from James was a perfect illustration of just how difficult the Heat are going to be to defend this year, particularly late in games.

But something else was plainly evident from watching the Heat on Saturday night, which is that if they are going to successfully defend their championship, they will have to find answers for a defense that has been riddled by all three opponents thus far.

While the offensive stats for Miami are gaudy, the defensive numbers are downright disgusting.

The Heat rank at the bottom of the league in points allowed through three games, and they’re also 28th in the NBA in opponent field goal percentage, and 27th in opponent 3-point percentage.

And this isn’t just a case of running into dominant offensive teams who simply catch fire against good defense.

The Celtics and the Knicks both ranked in the bottom half of the league in offensive efficiency last season, and while the Nuggets were and likely are still a very good offensive club, they managed just 75 and 89 points in their two previous games before Saturday.

Even worse Saturday was Denver’s dominance in the lane, as the Nuggets guards – Ty Lawson especially – got into the lane off the dribble at will, and big men Kenneth Faried and JaVale McGee played volleyball at the rim.

Interior defense has been a strength with this Heat team the past two years, with Miami ranking second in fewest paint points allowed (36 per game) last year behind only Philadelphia.

On Saturday, the Nuggets scored 42 in the paint in the first half alone.

“We clearly didn’t play consistently on defense like we wanted,” Heat coach Erik Spoelstra lamented after the game.  “We know we have to get better and make more of a commitment. We know it.  I know our guys feel like with the depth and versatility we have, there are a lot of things we’re doing where we can benefit offensively.”

“But our foundation was built on defense and we’re not going anywhere if we don’t shore that up.”

Certainly some of the issues can be boiled down to effort and focus early in the season for a veteran team that knows what it’s capable of in the postseason and knows that it can skate by many nights in the regular season without giving max defensive effort.

There have been more than a handful of games the previous two seasons in which Miami came out flat defensively and allowed big first half numbers before eventually turning up the defensive intensity and pulling away.

Consistent focus has been at times an issue with this group even before it won an NBA title, but some consideration should be given to how much of the Heat’s defensive struggles thus far can be attributed to its roster configuration more than a passive early-season attitude.

While the Heat’s interior defense was superb last season, the current small ball lineup featuring a James/Shane Battier/Chris Bosh frontcourt was not the standard for most of the year, and didn’t become a fixture until the NBA Finals.

This year?  Haslem has played just under 12 minutes per game, while Anthony has been reduced to bit player status, getting on the court just once for just seven minutes Saturday.

The subtraction of two players who are mostly liabilities on offense has made the Heat more difficult to defend, but the trade-off so far at least appears making Miami an easier target at the other end.

That puts the Heat 20 points above their average of 97.1 last year, which was good for fifth in the league.

Granted, three games is a small sample and perhaps the Heat will rectify their defensive issues with small adjustments and increased emphasis in practice, but it’s worth noting that the team’s two biggest additions to the rotation, Allen and Lewis, are both sub-par defenders at this stage of their careers.

Lewis in particular has often looked lost on the defensive end so far, lacking the quickness to stay in front of explosive wings like Carmelo Anthony, and the bulk to hold his ground against active interior players like Faried.

Allen became a solid defender in Boston, but he’s 37 years old now and is being asked to stay in front of smaller guards when the Heat go to a point guard-less lineup like it did often against Denver and at times against New York.

Allen simply doesn’t possess the foot speed to contain the dribble of most NBA point guards anymore, which begs the question of why the speedy Norris Cole, who is far more equipped to pressure the ball against quick guards, wasn’t used at all against Denver.

Maybe the adjustment is having Wade defend point guards when the Heat play without Chalmers and Cole, though to be fair, Chalmers was also ripped up by Lawson’s dribble penetration frequently Saturday.

“They’re breaking us down one-on-one,” Bosh said Saturday of the team’s opponents thus far. “We have to do a better job of taking the individual challenge.  Teams are living in the paint and breaking us down.  That’s got us closing out uncontrollably a little bit.

It’s still way too early to sound off the alarms on the Heat defense.

Spoelstra has proven to be a coach committed to defense, and the Heat still have several more than capable individual defenders in James, Wade, Bosh, and Battier.

But with the team’s new ‘position-less’ approach, the Heat have sacrificed interior size for increased offensive versatility, so when the team’s defensive intensity takes a dip, shootouts like Saturday’s may become the norm.

But the Heat coach didn’t appear ready to hit the panic button Saturday.

“It doesn’t take much for it to turn,” Spoelstra said.  “We also understand that it’s different this year.  Teams are coming after us.  That’s good.  It will make us better if we respond in the right way.”