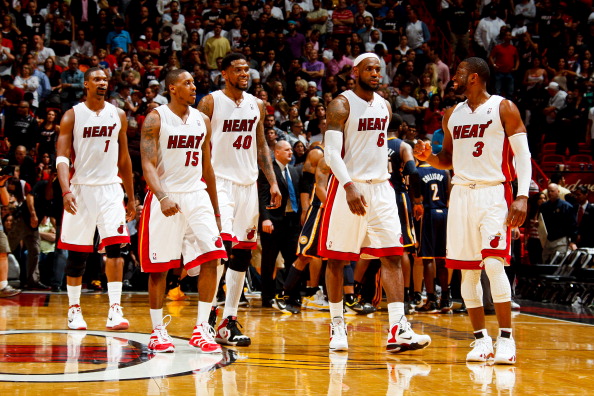 With the recent trade-up deal for Shabazz Napier and the player’s only meeting between Dwyane Wade, LeBron James, and Chris Bosh, it looks like the master plans of Pat Riley are beginning to unfold.

After LeBron had opted out earlier this week, Heat fans were on pins and needles anticipating whether Bosh would opt out, but more importantly, whether Wade would. Wade was owed over $41 million for the next two years under his current contract, including a whopping $20.1 million next season.

Well, good news Heat fans, looks like Dwyane Wade has officially opted out of his current contract most likely in hopes of re-signing with the Miami Heat and taking a lesser deal spread out over more years.

Dwyane Wade has opted out.

Even more good news came, when Chris Broussard of ESPN reported that Bosh has also decided to opt out of the remaining two years worth $42.6 million of his contract. Similar to Wade, Bosh is seeking a 5-year deal worth roughly $15-16 million per year.

And just for icing on the cake so that the Heat have even more salary cap to sign players with, Mr. 305 himself, Udonis Haslem, has also agreed to opt out of his contract. Haslem was owed $4.62 million with his player option, but most likely decided to opted out for the benefit of the team’s re-structuring. And you still wonder why Haslem’s a hometown favorite?

Udonis Haslem has opted out of his contract

Seems like Pat Riley is carefully and accurately putting the proper pieces to the puzzle in place, however there is just one huge question mark.

It’s clearly evident that all these opt-outs and purposes of restructuring are for the sole benefit of re-signing the planet’s best player in LeBron James. That if James does not end up re-signing, all of this may have gone to waste.

A very reliable source, Adrian Wojnarowski of Yahoo Sports, has reported that LeBron is indeed seeking a max deal if he were to re-sign with the Heat. This maximum contract deal would be for five years worth $130 million. It’s as if Riley is saying to James, “You want your max deal? Come and get it.” The Heat now have plenty of salary cap to sign James to a max deal and also have the ability to re-sign Wade, Bosh, and Haslem to less money over a longer period of time.

Sources: As James plans for max deal, Bosh, Wade and Haslem will opt-out of deals with hopes of staying together. http://t.co/UazTOX4XpB

If all goes according to plan, which it seems like it will, I must admit, Pat Riley is a sick, sick genius. Can he pull off the impossible again?