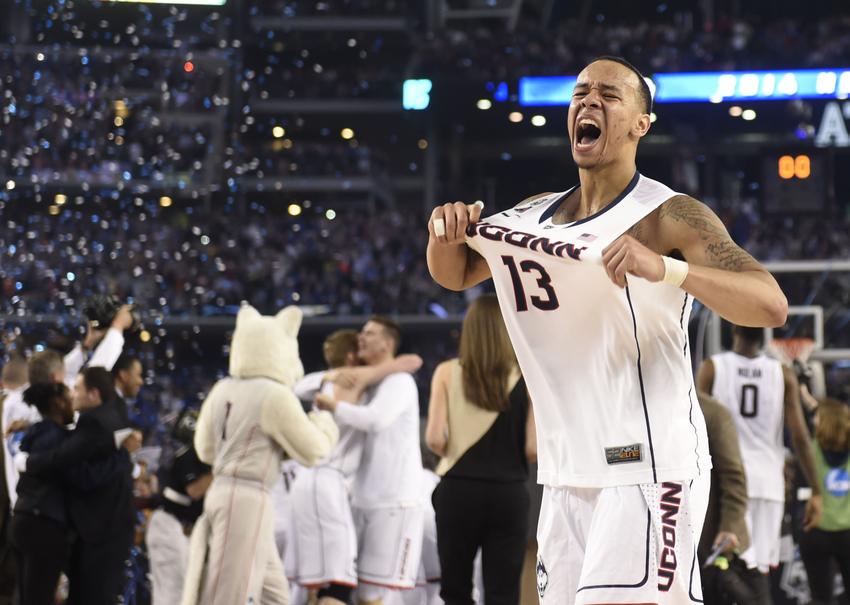 The Miami Heat got its man in the NBA Draft, while giving LeBron James another reason to remain in South Beach. After being selected by the Charlotte Hornets with the 24th overall pick in the draft, the rights to Connecticut point guard Shabazz Napier were traded to the Heat for Miami’s 26th and 55th picks in this year’s draft, along with its 2015 second-round pick, pending league approval. The Hornets will receive the rights to guard P.J. Hairston [26th pick, Texas Legends of NBA’s Development League] and point guard Semaj Christon [55th pick, Xavier] as part of the trade.

Napier won two NCAA men’s basketball championships in four career seasons with the Huskies, playing alongside Hornets point guard Kemba Walker for his first title and leading an unexpected title run in this year’s tournament. Napier improved every season and culminated his college career in tremendous fashion, shooting at least 40 percent from the field and from the three-point line en route to 18 points and 4.9 assists per game. The 2014 Final Four Player of the Year averaged 21 points per game throughout March Madness and dazzled many scouts in the process. However, Napier’s most coveted admirer was James, who tweeted during the NCAA Championship game that no point guard should be taken ahead of Napier.

With the Heat facing the possibility of losing James in free agency after the multiple-time Most Valuable Player opted out of his current deal earlier this week, management officially made their first attractive pitch to James by trading for a player he holds in the highest regard in this draft class. Much to the Heat’s delight, James showed his immediate approval of the pick via Twitter, calling Napier his favorite player in the draft.

After Connecticut served a one-year ban from postseason eligibility during the 2012-13 season, Napier vowed to secure another championship in his senior season, shunning the NBA Draft for a revenge-filled 2013-14 season with the Huskies. Napier cemented his role as a clutch performer, hitting a game-winning shot early in the season against eventual Final Four participant Florida and pushing the Huskies past four higher-seeded teams in the NCAA Tournament, while overcoming a draft prospect-laden Kentucky squad in the championship game. Napier’s knack for playing bigger than his six-foot, 175-pound size in critical games makes for an immediate upgrade to the Heat’s lineup of point guards.

Mario Chalmers and Norris Cole were extremely woeful during the Heat’s five-game NBA Finals series loss to the San Antonio Spurs, as the duo combined to average 7.6 points, 4.6 assists and 4.8 fouls per game. While both guards showed no scoring prowess throughout the series, their defense was just as ghost-like. Napier, meanwhile, plays with a chip on his shoulder, as evidenced in his rant against the NCAA following his championship win. Napier, who is also a solid defender with a career 1.8 steals-per-game average, thanked the NCAA for banning his team from postseason play, serving as his very motivation for the success of his final season at Connecticut.

With Chalmers set to become a unrestricted free agent and Cole not exactly filling the scoreboard during his time off the bench, the Heat’s move for Napier is not only a ploy to attract James, but also a selection that will address a dire need right away. Miami needs more consistent offensive output and defensive aggression at point guard. Napier will bring such abilities to South Beach, along with an on-court killer instinct that will popularize itself amongst the Heat fan base and, most importantly, James himself.