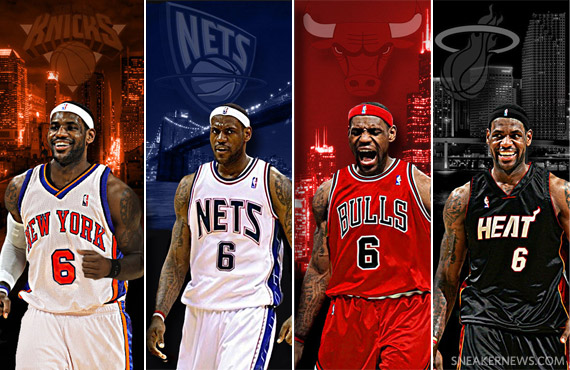 Hold your breath, Heat fans, because “The Decision 2.0” is officially upon us.

LeBron James’ agent Rich Paul notified the Heat and team officials this morning of his client’s intentions to opt out of the final two years of his contract, making him a free agent for the second time in his career.

There are rumors abound about what this could mean for James’ future, but even LeBron has said that he hasn’t made any decisions yet. Quite simply, by opting out, LeBron made the smartest decision he could’ve made for himself and his future.

There isn’t a team in the league that wouldn’t love to add LeBron to their roster, but to me, there are really only three options that really make sense. Seeing LeBron playing with Chris Paul in LA sounds like a dream scenario, but without moving some major salaries elsewhere, it just isn’t a viable option.

The most likely scenario is still that James re-signs and stays in Miami next year. LeBron opting out was the best possible scenario for the Heat, who need to restructure the contracts of their “Big 3” in order to make any major roster additions. There are rumors that LeBron isn’t willing to take a discount to stay in Miami, but if the the opportunity is good enough, it’s hard to envision James passing it up to go elsewhere.

Pat Riley has earned the trust of James in regards to building a championship roster, but last season LeBron was often carrying the team alone down the stretch. Riley knows what LeBron expects of him in return, and Riley released a lengthy statement on Tuesday regarding LeBron’s decision to opt-out:

“I was informed this morning of his intentions. We fully expected LeBron to opt-out and exercise his free agent rights, so this does not come as a surprise. As I said at the press conference last week, players have a right to free agency and when they have these opportunities, the right to explore their options. The last four seasons have been historic and LeBron James, Dwyane Wade, Chris Bosh and Erik Spoelstra have led the Miami Heat to one of the most unprecedented runs in the history of the NBA. We look forward to sitting down with LeBron and his representatives and talking about our future together. At the moment, we are preparing for the opportunities in the draft and free agency as we continue with our goal of winning NBA Championships.”

Obviously, there are the never-ending rumors that James wants to return to Cleveland and play for the Cavaliers again. The whispers only got louder this week, when James’ wife Savannah posted a picture on Instagram about her excitement to get home to Ohio.

The Cavs are the second most legitimate landing spot for LeBron, due mostly to his hometown ties and the team’s young core and potential. With the first pick in Thursday night’s NBA Draft, the Cavs are in position to add a wealth of young talent to surround James with, if he were to return to Cleveland.

Adding to the mystery, a source close to LeBron said recently that the NBA star hasn’t forgotten about his promise to bring a championship to the city of Cleveland. In the end though, Cleveland is still much less likely to land the King than Miami is.

The last option that seems like a logical landing spot is the Houston Rockets. With Dwight Howard and James Harden already in Houston, it would be a ready made “Big 3” for LeBron to join.

The Rockets opted to let Chandler Parsons become a restricted free agent this summer in hopes of adding either James or Carmelo Anthony to their roster. James could be lured by the potential of making another long run of championships with Harden and Howard, but it’s in LeBron’s best interest to stay in the Eastern Conference if he hopes to make it to the finals year over year.

That’s part of the reason that Cleveland and Miami make more sense than any other landing spot. Miami was able to make four consecutive NBA Finals appearances because of the weak state of the east, and it’s hard to see any team running through the west in the same manner.

If the Heat are going to keep their team together in Miami long-term, having James opt out was the best thing that could’ve happened for the team. Riley understands that winning is the only thing that is on LeBron’s mind in making his decision. The team’s sales pitch to a James will have to be centered around less money and more championship potential.

At the end of the day, there’s a long time before we find out where LeBron intends to play next season. But even with all the speculation, it’s not time to worry yet Heat fans, Miami still has the best chance to retain the greatest basketball player in the world for next season and beyond.

Strap in for a wild ride over the next month.

And don’t forget to pray.