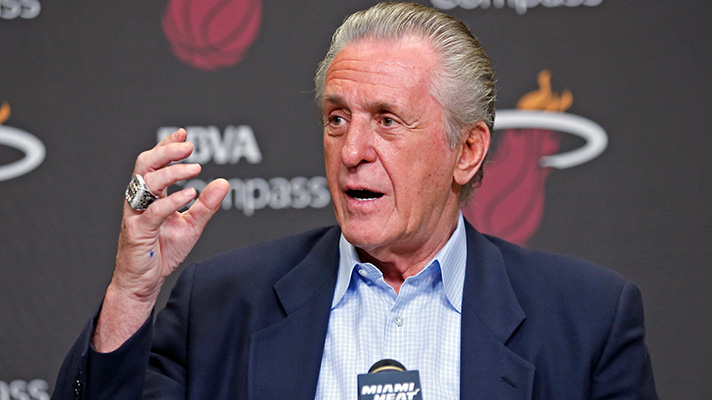 When it comes to Pat Riley, you’re getting nothing but honesty when it comes to his remarks. On Thursday when he addressed the Miami Heat’s struggles as a team, he was no different than usual.

Riley was on hand to announce the new Hoophall Miami Invitational Event, which will be held at American Airlines Arena to benefit the Naismith Basketball Hall of Fame and local charities. While at the event, he was asked a number of questions in regards to the Heat.

Riley was realistic about the team’s chances this season, stressing that Miami hasn’t played at the elite level they’ve been at for the last four seasons. Realistically speaking, the Heat’s president believes Miami is competing just to get into the playoffs this season:

“We’re in the fight. I think you have to recognize who you are and what your challenge is this year. We’re in the fight—but we’re not in the fight like we were before for the top of the conference. We are in the fight with five or six other teams for probably the playoffs—spots six, seven and eight—so get real about it, don’t feel sorry about it, and get after it.”

The team stands at just 19-24 this season, having won their most recent game against the Indiana Pacers. The Heat are just a game ahead of the Brooklyn Nets for the seventh spot in the Eastern Conference.

Many observers expected the Heat to be active on the trade market in terms of selling their assets or in an effort to improve their roster. Earlier this season, the Memphis Grizzlies expressed interest in Luol Deng before agreeing to a trade with the Boston Celtics to acquire Jeff Green.

Despite the Heat’s underwhelming record, Riley made it clear that the franchise is not active on the trade market, but will continue to listen to offers:

“If there’s something that makes sense that we can do that could really help us, then we would consider it. But we’re not about to give up assets that we don’t have—and that we need—to make a lateral move out of desperation and to take what I think is a playoff team to make the playoffs.”

Miami will continue its push towards the playoffs as they take on the Chicago Bulls (29-16) on Friday night at American Airlines Arena.
[xyz-ihs snippet=”Responsive-Ad”]